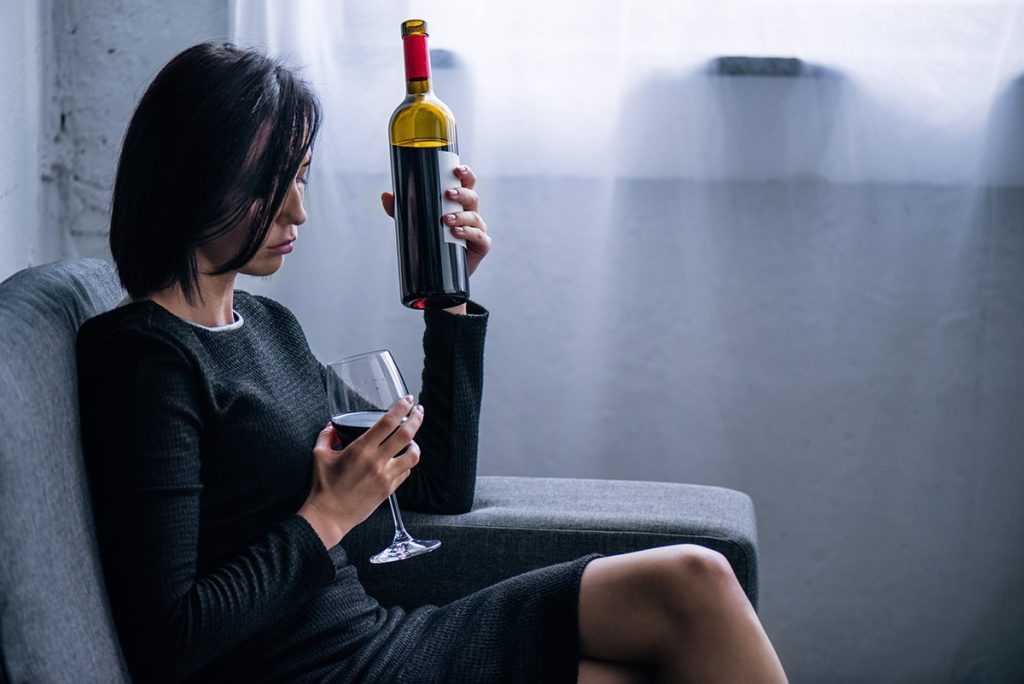 Alcohol can have stimulating effects, yet it is, in fact, a depressant drug.

When you drink alcohol you may feel more energetic initially from the euphoria alcohol produces however the central nervous system is slowed down and suppressed by alcohol’s effects.

Alcohol’s sedative properties can be felt in the way it makes you feel more at ease and relaxed. It can also help to calm nervousness and anxiety (1)

For many people, alcohol consumption is a means of relaxation. Some drink it because they like the taste, some to be social (1)  and some because they enjoy the feeling of being drunk.

Drinking alcohol is generally not a problem, providing it is consumed in moderation. The problem comes when a person drinks to excess. Alcohol has the ability to cause long-lasting neurological damage (2). It can also lead to physical alcohol dependence and addiction.

Here, Rehab Guide examines the potential risks of alcohol’s depressant effects, what a depressant is, how alcohol works on the central nervous system, and why drinking too much can lead to developing alcoholism.

The sedative effects of alcohol on the central nervous system

Alcohol slows down and suppresses the function of the central nervous system (CNS).

Alcohol slows down the speed at which messages are communicated and interferes with the brain’s interpretation.  This can result in experiencing altered perception during intoxication.

A person that is acutely intoxicated with alcohol will likely make poor decisions based on cognitive impairment and altered perception. The more intoxicated a person is, the more at risk they are of making dangerous and even life-threatening decisions (5)

The more a person drinks and the lower their tolerance is, the more pronounced these effects are.

Someone who is very intoxicated through binge drinking or mixing alcohol with another depressant drug is at risk of alcohol poisoning, respiratory depression and death.

What is a depressant?

A depressant is a drug that reduces excitability and calms a person.

Sedative substances do not necessarily make a person feel depressed, but they impact a person’s ability to respond to unexpected situations.

Aside from alcohol being a depressant, other commonly abused depressant drugs include benzodiazepines, sleeping tablets, opiates and GHB.

Sedative drugs affect the body and brain’s voluntary and involuntary functions by slowing them down and impairing how they work.

Why alcohol makes you feel good when it is a depressant

When we think of a depressant, we generally think of feeling low, lethargic and depressed. Whilst this may be true for someone that frequently abuses alcohol. Initially, it will have made them feel good. This is where it can be easy to confuse alcohol with being a stimulant.

There is a huge difference between stimulant drugs and depressant drugs, which basically affect the central nervous system in polar opposite ways.

Dopamine is organically produced by the brain and is essential for our mental wellbeing. Commonly abused substances artificially stimulate the release of excess dopamine, which is a neurotransmitter chemical, into the brain, creating a euphoric high or sense of well-being. However, this feeling only lasts as long as the substance.

The process of alcohol leaving the body causes feelings of anxiety and depression commonly associated with a hangover.

In those that are alcohol dependent, when blood alcohol levels drop, withdrawal symptoms kick in. Alcohol withdrawal differs from a hangover, which is essentially the body’s way of recovery.

Alcohol withdrawal symptoms can be extremely harmful, and they are caused by the brain and central nervous system not being able to self regulate or function without alcohol.

Why the effects of alcohol are bad for anxiety & depression

Alcohol is extremely bad for anxiety and can trigger the onset, especially when abused over a prolonged period of time. (5)

A person that attempts to self medicate anxiety or depression with alcohol will find that their mental health declines further over time. This decline can be rapid or gradual, depending on the amount a person drinks.

The long term effects of alcohol on the brain’s chemistry can also counteract any positive effects of prescribed antidepressants or anti-anxiety medications. This is one of the main reasons it is recommended to avoid consuming alcohol while taking medication for mental health illnesses.

Alcohol is well known for being one of the most, if not THE most, dangerous substance to withdraw from.

When a person is alcohol dependent, their brain will have adjusted to functioning with a certain level of alcohol in the bloodstream at all times.

During the process of developing alcohol dependence, the brain undergoes numerous chemical and structural changes.

When an alcohol-dependent person abruptly stops alcohol, having previously adjusted to being depressed chemically, it sends the brain into a state of acute overactivity. At the same time, dopamine levels crash to practical non-existence (6)

As dependence develops over a period of time, it stands to reason that the brain and body cannot automatically readjust when alcohol is stopped too quickly.

Stopping alcohol too quickly where there is a dependence result in the most severe form of alcohol withdrawal. This withdrawal, at best, can be extremely uncomfortable and, at worst, can be life-threatening.

If you or a loved one are dependent on alcohol, it is strongly advised that you seek medical help and treatment to stop drinking alcohol safely.

Effects can be safely reversed through undergoing medical alcohol detox, which suppresses the speed at which the brain readjusts and calms overactivity.

Here at Rehab Guide, we specialise in the provision of medical alcohol detox. We can arrange for you or a loved one to detox from alcohol with the assistance of approved pharmaceutical medications whilst recovering under high levels of expert care.

Mixing alcohol with other sedatives

Mixing alcohol with other depressants increases the effects of both the alcohol and the drug. Mixing two, or es most drug overdoses and deaths.

For example, mixing alcohol with benzodiazepines will increase drowsiness, decrease heart rate and decrease respiratory rate. Mixing alcohol and opiates can also cause breathing problems. Mixing two or more depressants is particularly dangerous and is what can lead to  respiratory depression, overdose and death (8)

Because of the risks associated with mixing depressant drugs, drinking alcohol with any depressant medication or drug should be avoided completely.

Even a small amount of alcohol added to a depressant prescription drug, where there is little tolerance of either, can result in an adverse reaction.

If you suffer from an addiction, abuse problem or dependence on alcohol or other depressant drugs, it is important to seek the correct medical care and not attempt to abruptly stop yourself.

We at Rehab Guide can assist you in the safe detox from depressant drugs. We can also provide personalised treatment to ensure that you never have to return to using them ever again. Call our helpline today on 02072052845 for a free and confidential treatment assessment and expert advice.