Amphetamine – What is it?

Amphetamines are derived from Ephedra, a bush native to central Asia and Mongolia; it also grows in the southwestern United States. The dried stems and leaves of the Ephedra plant can be dried and boiled in water to make tea.

Amphetamine ingredients were first formed into a more complex substance or compound in 1887 in Germany by Romanian chemist Lazăr Edeleanu who named it phenylisopropylamine. A team of Japanese and Chinese scientists isolated ephedrine from Ephedra, which was developed for production in the 1920s.

The potency of amphetamines became widely appreciated during the Second World War. Pills and food and cigarette rations were handed out to improve endurance, delay sleep, and perhaps increase aggression. Soldiers in Allied, German and Japanese forces took amphetamines in enormous amounts. By the end of the war, many cases of psychosis among service members were reported. As the addictive properties of the drug became known, governments began to place strict controls on the sale of amphetamines. As a result of the United Nations 1971 Convention on Psychotropic Substances, amphetamine became a schedule II controlled substance, as defined in the treaty, in all 183 state parties. In the United Kingdom, amphetamine is a class B drug that allows its use as a medical treatment.

Illicit amphetamines are made and sold illegally. Their quality and purity are questionable – they can be a mix of drugs, binding agents, caffeine and sugar. As a result, clandestine laboratories sprang up to meet demand.

Prescription Amphetamines have several medical uses and are taken as a street drug. It is exclusively available in the UK on prescription to treat specific disorders in the medical form. It comes under several brand names. These brands are specifically formulated to treat specific conditions.

What is Amphetamine Called on the Street?

Use of stimulant drugs such as amphetamines that are used as a medication, such as dexamphetamine, Adderal is usually produced as a small white pill. A doctor prescribing them will use them to treat conditions like Attention Deficit Hyperactivity Disorder (ADHD). Amphetamine-based medication in children appears to prevent unwanted brain function and structure changes.

As a street drug, amphetamine is generally swallowed as a pill, smoked or snorted as a powder, or mixed with water and injected. Amphetamine has a bitter taste and may have an odour of rotten eggs. Powdered methamphetamine is white, yellow, pink or green, depending on its method of manufacture.

What are Amphetamine Salts?

If you have heard salts mentioned when talking about Amphetamine, you may be wondering what that means. We might associate salt with what we find on our table, and table salt is one form of this type of compound. In chemistry, salt is a compound made to ensure no electric charge. This is important to do with amphetamines taken into the body (pharmaceuticals) because the free-from can be highly dangerous.

Is Cocaine an Amphetamine?

Cocaine, like Amphetamine, is a stimulant drug with similar effects. However, it is not the same compound. Amphetamine is entirely synthetic, whereas cocaine is derived from the coca plant. Many of the side effects are similar because the drugs stimulate the neurotransmitters in the brain’s reward centre. One of the main differences in cocaine use is that it lasts for a shorter time (an hour or less), whereas amphetamine can have an effect for several hours.

Amphetamine Effects and Side Effects

What are the short-term side effects of amphetamine?

Amphetamine symptoms and effects vary from person to person, depending on your mood, personality, where you are, who you are with, and how much you have taken.

Rather than being released in short bursts as needed for the body’s “fight or flight” response, amphetamine effects cause an enormous amount to be released at once. The seemingly additional energy provided by amphetamines comes from using up the stores of neurotransmitters in the central nervous system. This release is inevitable, followed by the feeling caused by depletion of these neurotransmitters – the sluggishness of withdrawal. An amphetamine dosage may increase attention and performance, but exhaustion eventually takes over, and performance deteriorates as the effects wear off. As a result, a person on amphetamines is often nervous, suspicious and hyperactive.

Speed may make you energised, but it can also make a person feel agitated and show signs of aggression, bringing on a rise in body temperature and heart rate blood pressure and affecting your breathing.

What are the long-term effects of taking amphetamines? 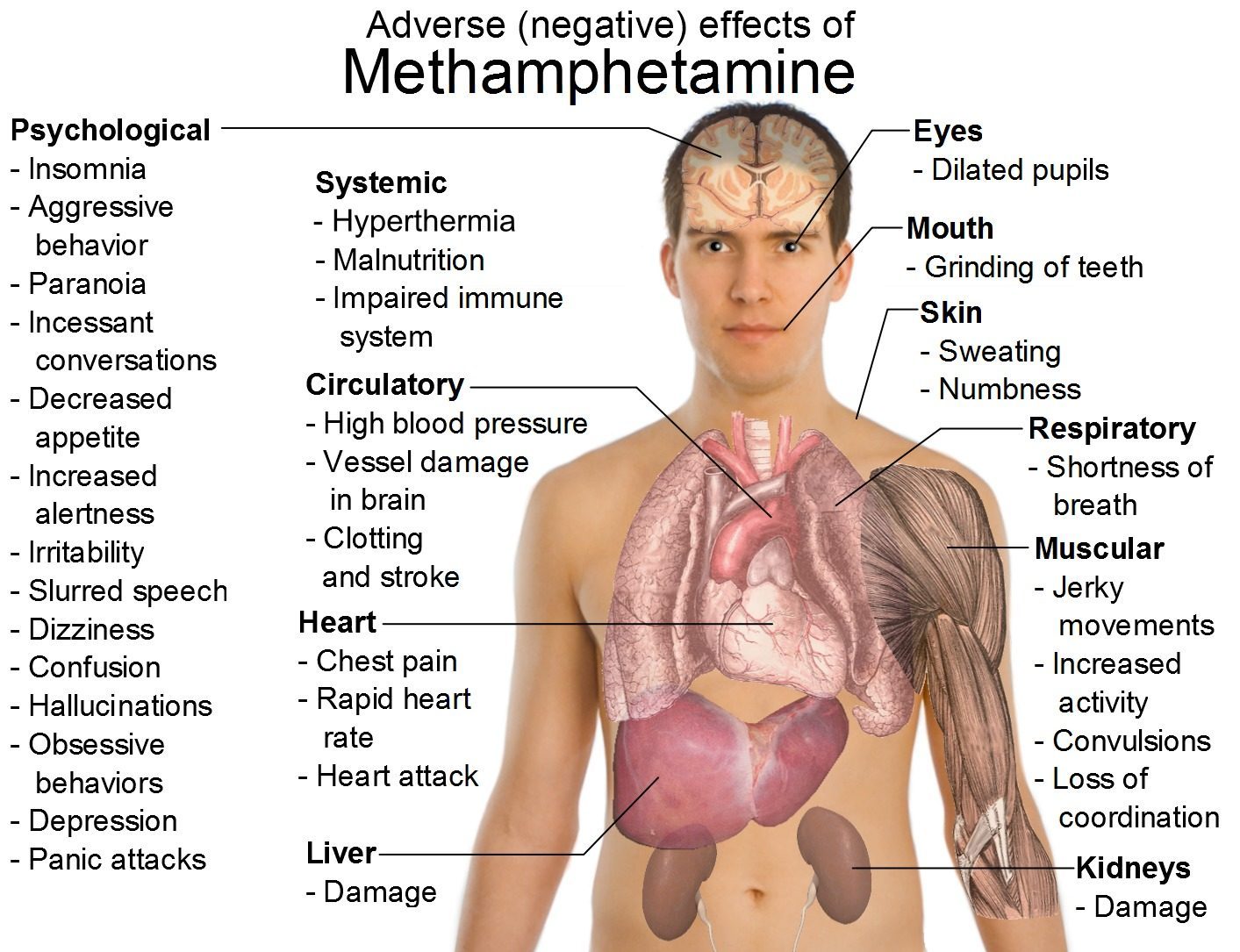 With repeated use, tolerance to the drug develops and attempts to reduce the dose result in depression and lethargy. Eventually, users are caught between being overstimulated when using the drug and overly depressed if they have not taken enough. It is impossible to maintain a satisfactory balance. Frequent abuse of amphetamines can produce a psychosis that resembles amphetamine-induced schizophrenia. This amphetamine psychosis is characterised by paranoia, picking at the skin, preoccupation with one’s thoughts and auditory and visual hallucinations. Violent and erratic behaviour is often seen among chronic abusers.

On the biological level, long term amphetamine drug use alters the sensitivity of the postsynaptic membrane receptors in the central nervous system, eventually leading to neurochemical exhaustion. However, if only low doses are taken, nerve receptors will regain their sensitivity when amphetamine use is stopped.

Another strong form of amphetamine is known as methamphetamine—high doses of methamphetamine cause permanent damage to the nerve endings of the serotonin and dopamine neurons. This may not be immediately apparent since there are billions of such nerves. However, as people get older and experience the normal ageing related loss of dopamine and serotonin neurons, this deficit can become noticeable in movement disorders such as Parkinson’s disease or mood disorders such as depression.

A medical dose of amphetamines seldom exceeds 60 mg per day and is unlikely to cause withdrawal symptoms when it is stopped. In contrast, heavy amphetamine users are tolerant of the effects and may need a dose up to 100 times greater than the original one. Withdrawal causes depression that may last for weeks resulting in a speed run/crash cycle. In addition, amphetamine addiction withdrawal generally produces the opposite of the stimulating effects. These conditions produce the amphetamine comedown effects that users experience.

Physically there can be muscular aches, abdominal pain, chills, tremors and voracious hunger. In addition, apathy, long periods of sleep, increased appetite fatigue, and a sense of sluggishness are common. 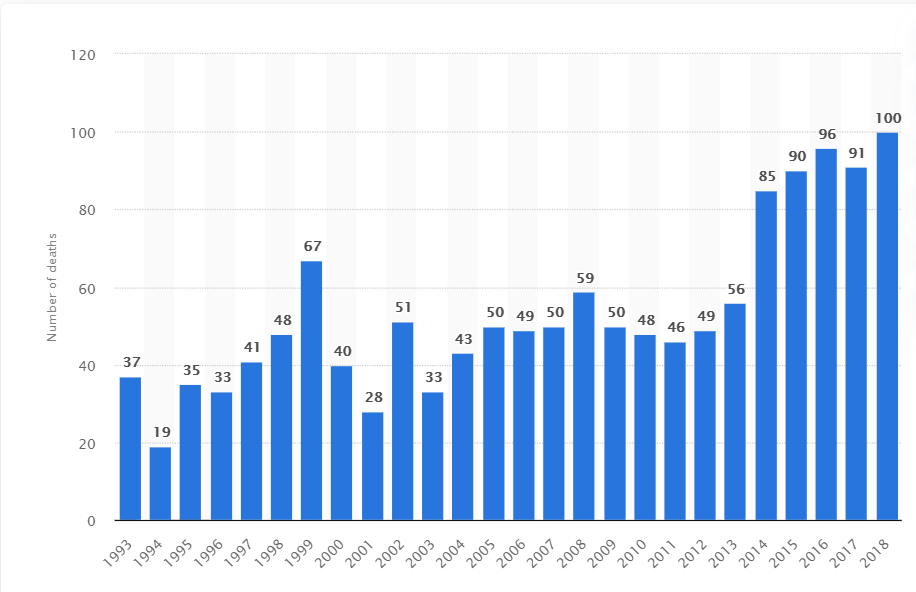 In 2018, there were 100 amphetamine-related deaths in England and Wales. Although this is a slight decrease from the preceding year, the number of deaths resulting from amphetamine use has sharply increased in recent years. Deaths remained around 50 a year before jumping to 85 mortalities in 2014.

Dangerous withdrawal symptoms from drugs can become life-threatening if not promptly treated.

Treatment begins with recognising; that you have a problem. Once you decide you want to do something about your drug abuse, the next step is to get therapy and support.

Admitting to a treatment centre

We can take care of all of the admission arrangements for you, so you don’t have to worry.

On admitting to one of the rehabs, you can be guaranteed a warm and friendly welcome. But, first, you will be taken to see one of our doctors who will conduct a full physical and mental health assessment.

Contact us or call today on 02072052845 for a free-of-charge assessment and find out how we can help you or a loved one access information and treatment and overcome a problem with amphetamines.

What is Legal Highs?

Being Married To A Drug Addict: How To Help Them And Yourself