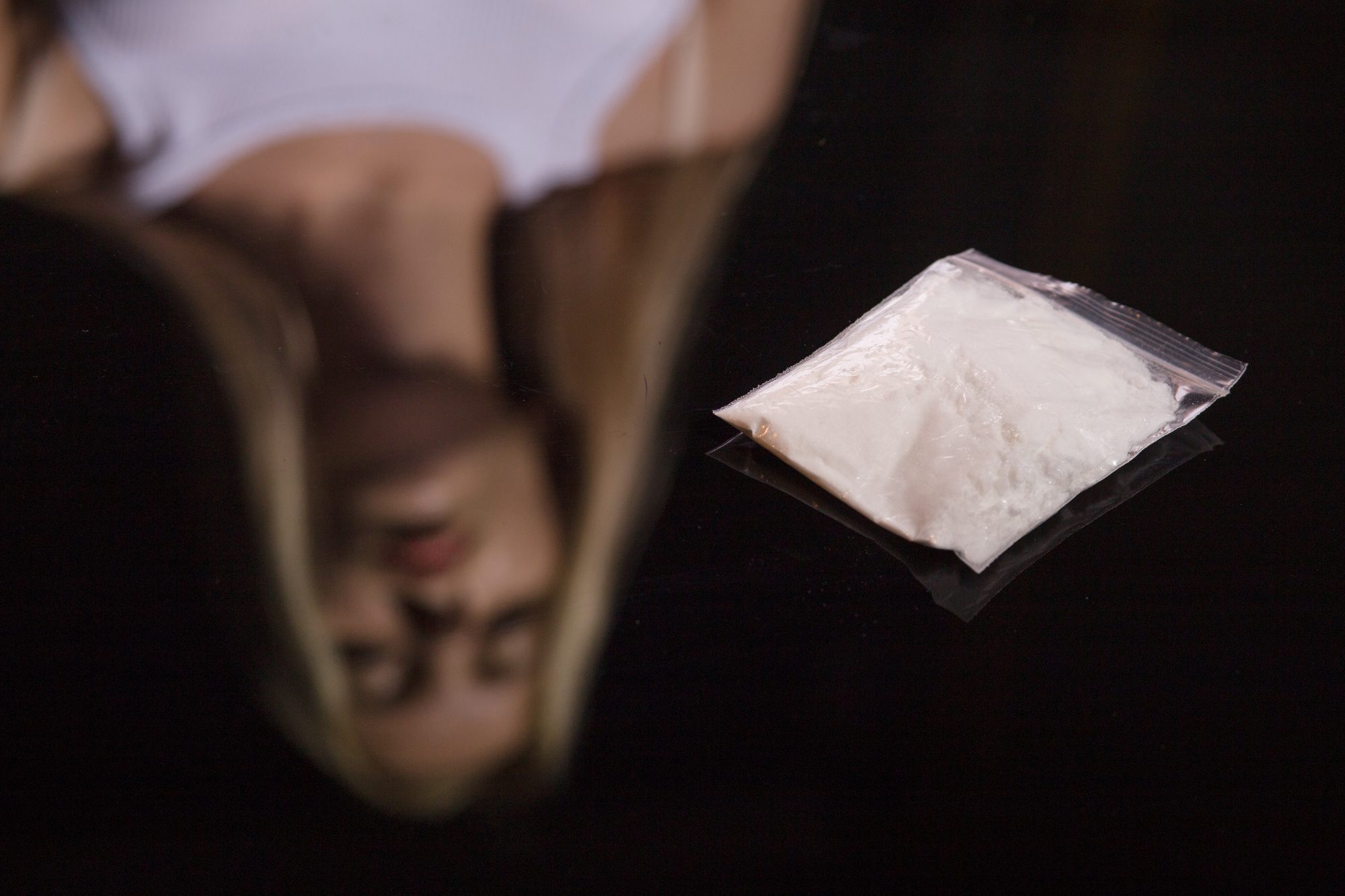 Methamphetamine is mainly used as an illegal recreational drug and is a potent central nervous system stimulant. Below we’re going to let you know what the meth drug is, what it looks like, and the effects depending on the stage of the methamphetamine experience that a user is currently in.

Methamphetamine is generally a white to tan powder. Drug seizures show an average purity of 54 percent, diluted with ingredients such as baking soda, lactose, Epsom salts, quinine, insecticides, photo developer, and strychnine to name a few. Heavy speed users may even prefer these additives because the impurities can give a more intense rush.

The effects of methamphetamine, are similar to those of cocaine, but their onset is slower and they last longer. Like cocaine, methamphetamine causes a rapid release of serotonin and dopamine from nerve terminals. In high doses, it can injure the serotonin nerve endings, and up to 50 percent of the dopamine-producing cells, with the possibility of long-term brain damage.

Crystal meth is the name that methamphetamine can commonly be found under. It’s only one of the various forms that methenamine can be found and used in. Other common names that it’s known under include both crank and speed, ice and more commonly glass.

Most that use crystal meth find themselves becoming addicted after the first use because of how powerful the effects of the drugs are once ingested into the body.

This is one drug that can be challenging to fight when you’re looking to leave behind your life of addiction and enter into sobriety, but that doesn’t mean it’s impossible.

Methamphetamine first came to be in the 1800s and was used by soldiers that were fighting in WWII. The reason the drug was being given to soldiers was to help them stay awake and alert in case the enemy planned to attack.

With many soldiers using it for this purpose throughout the war, their bodies began to become addicted to the way that it made them feel, therefore continuing to use the drug even after the war ended.

It wasn’t soon after the drug continued to be prescribed to people that they began using it without a prescription for recreational use.

How Do You Take Meth?

Internationally, methamphetamine has become the drug of choice for young people, particularly in nightclubs. There are several different ways that someone can take crystal meth. The first way is by snorting it, this is the most common way that the drug is ingested by crystal meth users.

Once the drug is snorted, it will then enter into the bloodstream through the vessels that are located in the nostrils.

Prolonged snorting of any drug can cause both the mouth and nostrils to become inflamed. When this happens the chance of a hole being eaten into the nasal cavity or a collapse of the nostrils increases.

Another common way for meth to be taken is by using a meth pipe. A meth pipe is typically a long hollow tube with a round bulb at the end. Users will then place meth in the bulb part of the pipe and heat it using some kind of heat source.

As the meth vaporizes, the user will inhale the smoke, and this can cause burns on the lips of the user if they are continually using. One way that you may not have heard of often is mixing meth powder into a drink. Or simply taking the drug orally through a pill that contains the meth drug inside it.
Regardless of the method that someone decides to take methamphetamines, it’s dangerous, and some severe meth effects can lead to death in the most severe cases.

Now that you’ve got a better idea of how the drug is taken it’s essential that we discuss the stages of addiction.

When people are in the experimentation phase, they haven’t yet reached full-blown addiction. During this phase, someone may be interested in knowing what it feels like to use the drug not knowing that even one use of the drug can lead them down a path to becoming addicted to the drug.

When a methamphetamine user is in the social phase of use, it means that there currently using only during social occasions. For example, when they are out with friends. But, once their alone, they may not use as much as they do when they’re in the presence of others. Again although it may start as social use, it can easily lead to addiction. Social pressures can also be known as peer pressure.

This is when the effects begin to take hold, and someone starts to not be able to go without using the drug as they may have been able to do before. While they were experimenting or using socially, they may not have realized that their bodies slowly built up a dependence and that their bodies began to need the drug.

This is when nothing else matters anymore except getting that next high. Common behaviours that one will begin to notice when someone has reached addiction level is the user manipulating or start to lie to those around them about their drug use.

You may also find that the addict loses sight of their priorities and stops doing things like going to work or caring for themselves and their families. Once someone has reached addiction level, the only thing that matters is feeling the way that they felt the last time they were high.

The first pink methamphetamine effects that a user will experience is the rush. This rush is felt commonly after someone has either injected or smoked the crystal drug using a pipe.

The rush explains the feeling of the drug entering into someone’s system before they begin to feel the actual high of the drug. Some users describe this as getting an overwhelming feeling of calmness when they’re feeling the rush.

When someone experiences the rush, various things will begin to happen, including:

The rush that someone feels from using methamphetamine can last for upwards of thirty minutes, which far exceeds the rush that one would feel when using a drug like cocaine.

This is the point when the high begins to set in for the addict. When someone is high on methamphetamine, there is no reasoning with them because they are no longer using common sense when speaking. Instead, someone can become quite aggressive, which can lead to frequently arguing with everyone that tries to talk to them.

Or someone may become so focused on one thing that they begin to do it for the next several hours. If someone has been using methamphetamine for an extended period, it could lead to a mental break known as drug-induced psychosis.

This is the point when the addict wants to continue using, no matter how high they are. Whatever they can get their hands on, they will continue to use it. And when they’ve run out of it, they will do what they need to do to get more and continue using it.

As someone continues to binge each time they use, they won’t achieve the same rush that they felt the same time they used. A binge can take days before someone comes down from the drug effects.

Once they’ve reached the end of the binge phase, they will begin to start tweaking, which can be dangerous for anyone in close proximity to the user and the user themselves. When someone isn’t able to satisfy their cravings for meth, they will begin to further fall down the tunnel of psychosis and begin to think that bugs are crawling on them or in their skin.

This is also when they begin to hallucinate and hearing or seeing things that aren’t there.

This is when the body begins to shut itself down because it can’t take the effects of the drugs anymore. When someone enters into the crash part of drug abuse, they begin to sleep for hours even days on end.

You might even be concerned as to whether their okay and still breathing. Once they awaken from their slumber, they will enter into the hangover stage.

In this stage, they will appear sluggish, malnourished, dehydrated, and overall unwell. They will also be exhausted in each and every way mentally, physically, and emotionally.

When people begin to feel this instead of continuing to feel poorly, the addict will seek out the drug to use again.

Withdrawal is a more advanced version of the hangover. This is when people become overly sick, and their bodies begin aching.

Withdrawal is commonly one reason that people continue to use instead of sticking it out in treatment because as time continues the symptoms of withdrawal will only become stronger. Instead of continuing to feel poorly, most will find a way to use even though the cycle will continue, and they will eventually end up feeling these feelings of withdrawal again.

Drug addiction is all a cycle someone gets the drug, uses the drug, gets high, begins to crash, and then faces withdrawal until they are able to get the drugs again.

Meth Before and After: The Effects of Meth

One of the first effects that someone would experience when using crystal meth is a sense of euphoria. It stimulates the rewarding feeling that the brain gives off and leaves someone in a higher state of mind.

Another common effect felt by users is empowerment. When someone is high, they will feel as if their invisible and able to do anything no matter if it’s dangerous or not for them to be doing it.

Tweaking, as we mentioned earlier, is also a common effect. And this is when they can nervously pick at their skin because they feel that something is underneath the surface. This can lead to scabs and scar tissue building up over time as their addiction continues.

When someone becomes focuses on things like picking during the tweaking phase they can spend hours upon hours digging into their skin. And whereas they see and feel something in their skin others will see nothing.

When it comes to methamphetamine and the side effects or getting into what is methamphetamine we hope that we’ve provided the answers you were looking for. Having all this information means you’re better equipped to enter into treatment.

Contact The Rehab Guide and ask what programs they have to offer to you or your loved one that is suffering from addiction. In treatment, you’ll get both the support and resources that you need to ensure that you can get sober and stay sober.