Spice is the most commonly known synthetic cannabinoid drug available. Originally marketed as a designer drug and legal high, Spice addiction and abuse gripped the UK from the late 2000s to 2010.

Soon after the introduction of the drug, many people became addicted to Spice. They assumed that it was a safer alternative to cannabis as it was legal. This highly potent artificial drug has powerful psychoactive properties and can lead to drug dependence and addiction.

Finally, after many public health concerns arose around the drug’s safety, the UK banned Spice and all of its variants in 2016 under the Misuse of Drugs Act. The 2016 Psychoactive Substances Act was introduced and covers “any substance intended for human consumption that is capable of producing a psychoactive effect”. This drug law effectively places a blanket ban on all legal highs in the UK.

In this article, we look at the effects of Spice, the signs of addiction and withdrawal symptoms. We also advise what to do if you need help with this particularly innocuous substance. 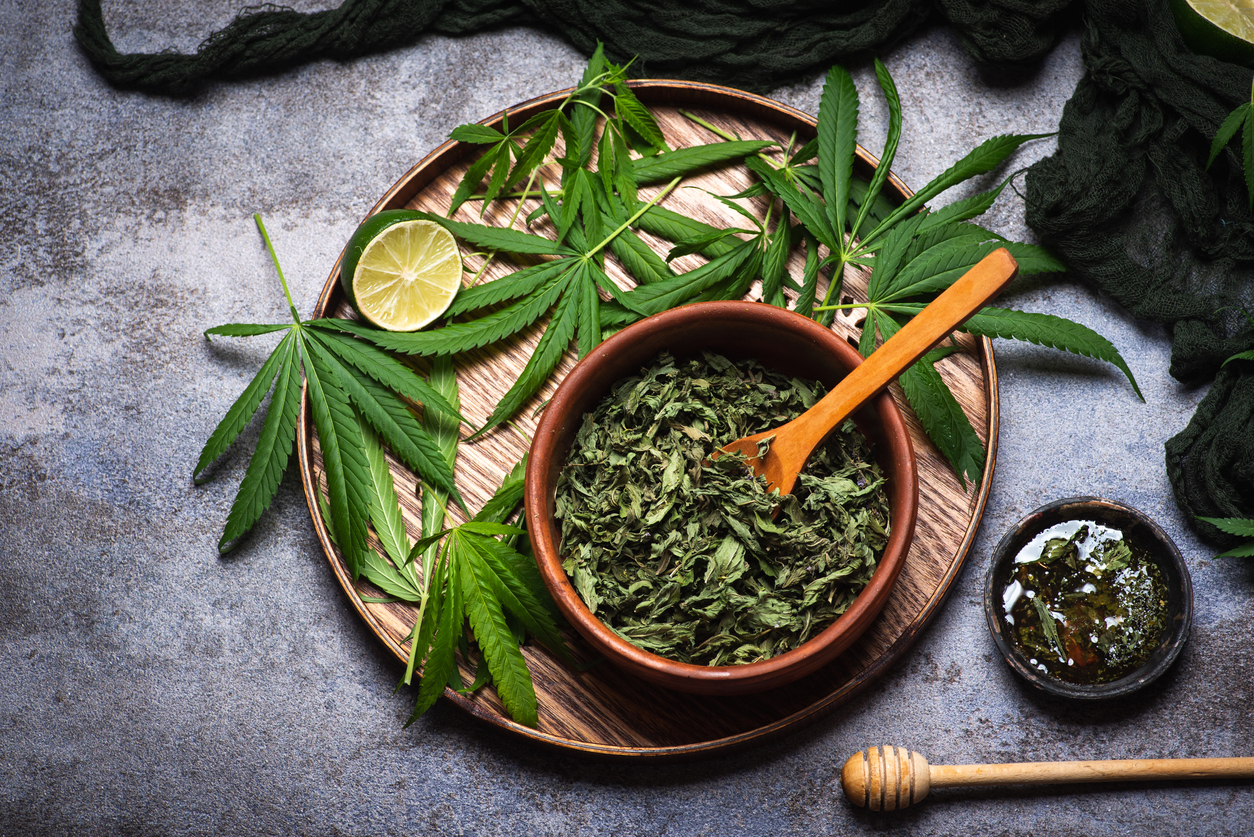 What is the Spice Drug?

Spice is a synthetic drug. Whilst it was originally sold as a synthetic cannabinoid that could mimic the effects of cannabis, it is far more potent. It is produced in laboratories and is sometimes referred to as ‘fake weed’.

When Spice first hit the UK, you could buy it legally from ‘Head shops’ where it was sold as a herbal smoking mixture and in the form of room incense. Retailers originally got around the law problem by labelling products unfit for human consumption.

K2 is one of the original Spice products. Since the early introduction of Spice and K2, numerous brands have been produced and released. All of the variants contain similar compounds to the original drug.

Spice is a smoked drug, usually with tobacco in the form of a joint or spliff.

Unlike medical marijuana, Spice has zero medicinal benefits. As a Class B illegal drug, produce is completely unregulated by any authorities.

Is Spice Legal in The UK?

Spice is cheap to buy in comparison to other drugs. For this reason, it is still popular amongst the homeless, youths and in prisons.

How Spice is used and abused

The most common method of Spice abuse is to roll it with tobacco within a cigarette paper and smoke it. Some choose to use it as an added extra to a cannabis-laced joint. Spice products can also be vaped through an e-cigarette and consumed in tea or edibles.

What you need to know about Spice:

The American chemist John Huffman originally produced synthetic compounds of THC in his studies of the impact of cannabis on the brain in the mid-1990s. This involved the creation of JWH-018, which was similar in its chemical structure and effects to that of THC (the active compound in cannabis).

It was the creation of JWH-018 that led others to try and replicate and sell it in herbal smoking mixtures.

Due to the many variations now available, synthetic cannabis contains variations of this original chemical. These are untested, unpredictable and unreliable.

Using Spice for the First Time

Someone using Spice for the first time might expect its effects to feel similar to that of cannabis. However, this is often not the case. The effects of Spice can not only be very different to that of marijuana but also be much stronger and last for longer. Furthermore, a person using Spice/K2 is far more likely to suffer adverse effects than a person smoking natural plant-based marijuana.

How Spice earned the nickname the “Zombie Drug.”

When Spice is used, it has a range of effects on the body, one of them is it slows down and depresses the respiratory rate. This can leave a user barely breathing and in a slumped state. Other effects of Spice include agitation, being in a dream-like state and aggression, making users’ actions unpredictable. These effects earned it the tabloid nickname of the “zombie drug.”

The Effects of Spice

The effects of Spice can be difficult to predict due to its ever-changing formula. However, users reported some common side effects.

Common effects of Spice include:

As you can see, many of the side effects reported contradicting each other. Spice can affect each person differently, and its effects can vary depending on the chemical compound used.

Aside from the common side effects of Spice and K2 products, some more worrying and even fatal side effects have also been recorded.

Dangerous side effects of Spice include:

In the UK, there have been several deaths reported due to Spice. There have also been numerous arrests and hospital admissions due to the use of Spice products.

Spice works on the cannabinoid receptors. When you stop taking it, it has similar effects to cannabis withdrawal. However, due to the additional effects from the other ingredients and psychoactive properties, Spice withdrawal can be somewhat more challenging than your average marijuana detox.

Drug withdrawal symptoms, in general, tend to be the opposite of the drug’s effects. If Spice causes you to feel relaxed, you are likely to experience anxiety and agitation on stopping, and so forth. So if Spice makes you feel euphoric, in contrast, whilst detoxing, you are likely to feel dysphoria.

Some common symptoms of Spice withdrawal include:

As well as experiencing changes in your mood and outlook, you may also experience nausea and vomiting.

How long these symptoms last depends on the variety of Spice you have been using, the amounts involved and the duration of your use

Spice addiction and dependence will develop the most severe withdrawal symptoms if detox is conducted without medical monitoring and support.

In a few instances of Spice withdrawal, there have been more troubling withdrawal symptoms recorded, such as seizures and difficulty breathing.

If you or someone you love develop any concerning withdrawal symptoms, you should seek immediate medical attention.

Can you overdose on Spice?

Some Spice users have said that the effects of the drug are stronger than heroin. They say it left them in a slumped and motionless state for hours on end.

Most people know the dangers of a heroin overdose but would not necessarily apply the same knowledge to Spice.

You can indeed overdose on Spice. It is more likely to happen if you consume the drug instead of smoking it. Spice overdose is also a higher risk factor if you combine Spice with other drugs. For example alcohol, cocaine, prescription painkillers, benzodiazepines or opioids can be problematic.

Combining Spice with alcohol or other drugs increases your risk of breathing complications developing.

Signs and symptoms of Spice addiction

Frequent use of Spice can progress into a full-blown addiction. Once this happens, the person affected will find that they lose the power of choice in whether they use Spice or not.

Addiction is a recognised medical condition and a brain disease. It is progressive and results from the brain undergoing substantial changes due to being overexposed to drugs.

Due to the changes in the brain being long-lasting, you cannot cure Spice addiction. However, it can be stopped and successfully treated, and from there, complete abstinence is possible.

Someone seeking to stop using Spice will first undergo a detoxification process. This process can be very uncomfortable and keep a person in the perpetual cycle of Spice addiction.

If you want to stop using Spice but find you cannot or find that withdrawal is too overwhelming, then a medical detox would be your first step.

A full medical detox within one of our private drug detox clinics will provide you with approved prescription medication to help your Spice withdrawal symptoms.

For the duration of the detox process, you will receive hands-on monitoring delivered by a team of qualified nursing staff and support workers.

Following the detox, you will then have the opportunity to undertake a bespoke drug rehabilitation programme. The treatment programme will be tailored to meet your individual treatment needs specifically.

If you or a loved one are struggling with an addiction to Spice, life can seem pretty hopeless and pointless. However, all it takes is deciding to say, “this is not how my story ends.”

Treatment for Spice addiction today has evolved and, as a result, is very effective. Accessing the right treatment programme for addiction has the power to change your life.

Private inpatient rehab for Spice addiction will not only provide you with a full medical detox but will also get down to the causes of your condition.

To stay abstinent from addiction, healing the past and the causes that drive the addiction are paramount. Through the healing process, you can find freedom from addictive substances.

Inpatient addiction treatment will give you access to the latest in evidence-based treatments for addictive disorders, including:

For a rehabilitation programme to work, it needs to be tailored to your individual treatment needs. This is why a screening process before rehab is so important. It ensures you enter the correct treatment programme for your condition.

Medication can play an important part in the successful treatment of a Spice addiction. Firstly, medication can help to break the addictive cycle. This is the first step in recovery and needs to happen before therapy and counselling can be optimally beneficial.

Within the safety of a treatment setting, there will be access to approved medications prescribed by the doctor. These medications can assist in the detoxification process and help you stay abstinent in the long term.

Because all aspects of a person require treatment, part of our screening process is to examine what this means in terms of your treatment. For instance, if you have PTSD, anxiety or depression, a treatment plan will be put in place to address this. This may or may not involve medication.

Please call or chat with us online today for a free of charge assessment with one of our friendly treatment advisors.

Side Effects Of Steroids