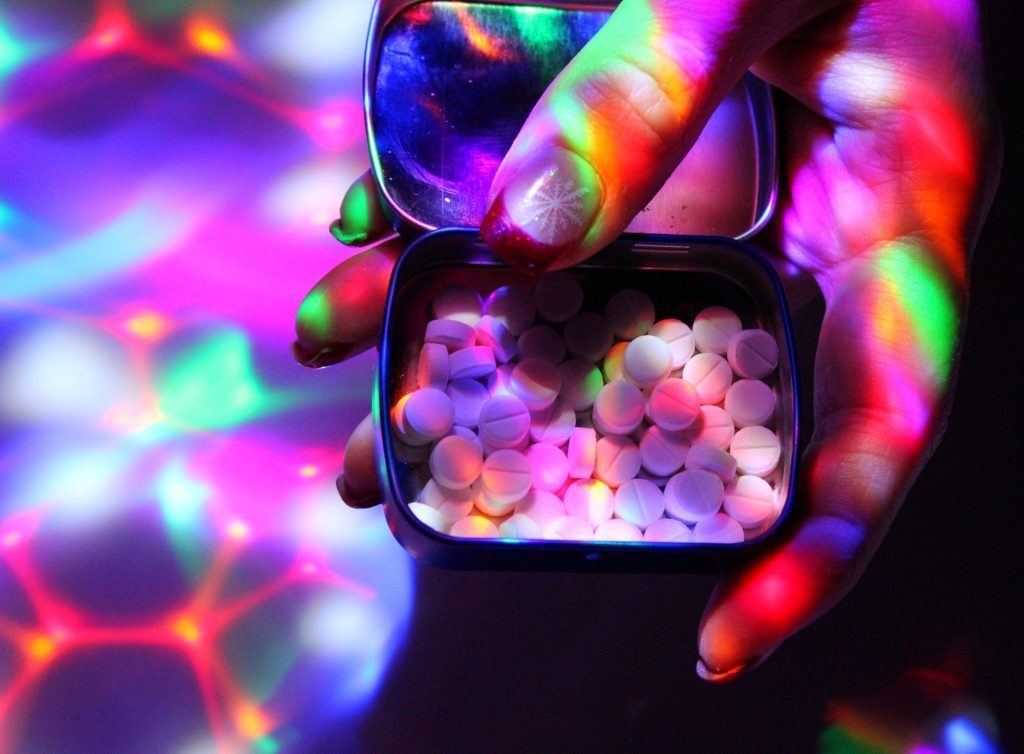 Ecstasy is a synthetic drug that can have users feeling like their on top of the world. That is until they aren’t anymore when you enter into recovery, one of the first things you’ll have to do is go through MDMA withdrawal.

If you or someone close to you has been using ecstasy or MDMA as it’s known it’s essential that you understand what the MDMA withdrawal will be like. This is one of the most challenging parts of sobriety, and the symptoms caused by it are one of the main reasons addicts continue using.

We’re going to provide you with the education you need to prepare yourself or someone else to undertake withdrawal and come out on the other side. Without further ado, let’s jump right into some of the most common symptoms and MDMA side effects that someone may experience when going through withdrawal.

MDMA pills are often used as a stimulant for those that are using them. People that use the mandy drug typically do so when attending events like concerts or festivals.

Once the drug’s taken, it heightens the senses and makes the user feel connected to those around them in a way that they’ve never felt connected before. But, once you stop taking the MDMA drug is when fatigue will begin to kick in.

This drug interacts with the sections of the brain that are responsible for serotonin and dopamine release, the more you use, the more intense the effect. Once the drug has left the system, the energy that was once felt will plummet, leaving the addict more tired than they’ve ever been in their lives.

While all they want to do is sleep when the other symptoms of withdrawal begin to take place, it will become increasingly challenging to stay still let alone get any type of restful sleep that could combat your feelings of fatigue.

After ceasing to use ecstasy’s as we stated the user becomes exhausted, but we also stated that getting any sleep will be next to impossible. After you’ve stopped using you will go into repair mode. It will begin making its best attempt at healing itself and returning to normal. One thing that you may or may not have noticed when using molly is that you didn’t sleep much.

Because of this, your system has become accustomed to staying up longer hours and receiving the bare minimum amount of sleep needed to function. Until it returns to normal, your sleep cycle will be off, and you may find yourself plagued by many sleepless nights.

Problems With Your Sex Drive

Chronic substance abusers will find that their addictions have caused a negative decline in their sexual relationships.

For men that are consistently using, there are a number of negative side effects. They may begin to have issues maintaining an erection, which is known as erectile dysfunction. Or they may realize that whenever they do engage in sexual activity, they don’t last quite as long and find themselves prematurely ejaculating.

In both sexes, they may find that their sex drive has decreased significantly and reaching orgasm has become challenging if not impossible. The best way to correct these issues is to stop using them altogether.

From there, a licensed and training physician will be able to speak with you about the next steps that should be taken to correct sexual intimacy issues that were caused by consistent drug abuse.

As an addict, one of the signs that you were using was constant mood swings. One second you’re high and loving everyone. The next minute you’ve got no more drugs, and now you’ve become someone who is extremely angry and ready to rip everyone to shreds until you’ve got what you want.

Unfortunately, in the beginning, stages of withdrawal, and for some people, even after withdrawal, you will continue to experience mood swings. Mood swings are a result of a hormone imbalance that was caused by constant drug use.

Your mood swings could’ve also been caused by an underlying mental health issue. If you’ve got schizophrenia or bipolar disorder and it wasn’t being treated, this can cause you to experience frequent mood swings.

Once you’ve entered into treatment, you’ll be given the tools you need to cope with these mood swings and remain in control. If the mood swings are due to other mental illnesses, your physician may prescribe a medication that will give you the power to maintain control as long as you’re following your regiment.

When you’re using MDMA powder, you’re not feeling anything, and you’re also not taking the time to rationalize any decisions that you’ve been making. When you’re no longer using you will realize that you’re left in this brain fog.

This fog can leave you confused about what’s going on around you, or it may be caused you to become easily confused when you’re trying to think of specific things or words that you want to say. There’s no telling how long this type of confusion will last or when it will go away.

It depends on several factors, including how long you’ve been using the drug and how much you were using when actively in your addiction. Experiencing this mental fog can be frustrating, especially when you know what you want to say, but don’t know exactly how to articulate that in a way that it will make sense.

Your counsellors in treatment will provide you with the tools you need to help work through the fog without becoming overly frustrated by the withdrawal side effects of MDMA ecstasy.

Panic attacks are another symptom of mandy MDMA withdrawal. There are various reasons that a person may go through the experience of having panic attacks. One reason could be experiencing flashbacks that can commonly occur when someone has been using a hallucinogenic.

Panic attacks can happen when someone becomes overwhelmed as a result of having to deal with their emotions and thoughts. When you’re in active addiction, you don’t deal with the thoughts, emotions, or actions that you’ve committed in the past.

When you’re using MDMA ecstasy, you glaze over and don’t have to deal with these things. Once you’ve gotten past the withdrawal symptoms, you’ll be provided with the tools you need to ensure that you can process these emotions and thoughts without wanting to use.

Having coping skills is one of the most significant pieces of your recovery journey. Without a support system and coping skills, there is nothing standing in between you and a potential relapse in the future after you’ve left or are still in the treatment facility.

One of the common molly comedown effects is paranoia. Using a hallucinogenic can cause increased paranoia because of the things that a user experiences when they are in the middle of taking MDMA. The visual and auditory effects that someone experiences after taking a mandy bomb can cause the user to become untrusting of those that are around them.

It can lead them to believe that other people or things are trying to harm them. Because of this ecstasy feeling, they may begin to act out and try to harm others before they’ve had a chance to harm them. If someone close to you is showing signs of paranoia, and they haven’t yet been taken to treatment, it can be scary and terrifying.

In the event that they begin to act in a way that shows they want to harm themselves or someone else, you can always request a mental health check from the local law enforcement.

If they deem that the person is a danger to themselves and others, they will do what’s necessary. This may include having them taken to a mental health facility where they can receive the treatment that they need.

40 million people suffer from anxiety worldwide. Depending on your physician, you may be prescribed things like antidepressants. This is to help cope with anxiety symptoms. In recovery, anxiety can stem from having to confront your past and traumas that may have led you to continue using.

Anxiety can easily get out of control if you don’t know ways to manage it. Given that you’re searching for help and wanting to enter into recovery means that you’re not certain of how to handle the anxiety that you’re suffering with.

How long do pills last? How long does MDMA last? The time frame that this drug lasts in your system can cause you to experience a drop in your appetite. The reason for this is that MDMA crystals are a known stimulant.

When your body is stimulated consistently in this way, you’re not going to be as hungry as you usually are. After beginning treatment, it’s not uncommon for those in recovery to begin gaining weight.

As your appetite begins to return, you’ll begin to become hungrier over time. The MDMA class is known for appetite suppression, and for some people, the molly powder taste is the only taste that they’re looking forward too.

What to Expect From Treatment?

In treatment not only will you be educated about what’s mandy done to your health, but you’ll also learn things like how long does ecstasy stays in your system or what do e pills do to you. It’s a given that you’ll already know what does MDMA look like since you were using it.

It should be known that treatment isn’t going to be a quick fix for those that abuse ecstasy tablets or any other substance. It’s something that you’re going to have to work at every day.

It’s when you become comfortable and can leave yourself vulnerable to making the same poor choices that you were making before getting clean. Your life is not worth throwing away for a momentary high that you receive from using e tablets.

There are various MDMA withdrawal signs and symptoms that you might experience. You may find that at the beginning of the withdrawal process, you will experience increased insomnia as well as the fatigue that you’re feeling. As you continue through treatment, you’ll slowly begin to enter into a better sleep cycle getting the restful sleep that you need.

Withdrawal symptoms might also include paranoia that other people are trying to harm you when they are not. Contacting The Rehab Guide means that you’re taking the steps you need to take to get your life back. Phone 02072052845.

We want to be apart of this new chapter of your life. Let us provide the help that you’ve been looking for.