In moderation, alcohol can be helpful as a social relaxant. However, the effects of alcohol become more unpredictable when consumed in excess.

Actually understanding the effects that alcohol has on our body and our brain and how alcohol actually works is complex.

Most of us know that alcohol changes the way that we feel. It may make us feel more relaxed, happier or perhaps for some, angry or sad.

There is also the phenomenon of some people reacting very differently to alcohol from others. Once they start drinking, there is no telling when they will stop, or what their behaviour or mood will be whilst under the influence.

Here we look at how alcohol works on the human body and brain, and why for some people, drinking should be avoided at all costs.

How the body processes alcohol

To understand how alcohol works, it is important to know how the body processes alcohol. This can have a direct effect on how it works on you as a person.

Your current organ health and lifestyle can have a huge impact on how you process it individually.

Those that suffer from compromised liver health and/or drink excessively will process at a much slower rate than those in good health who drink in moderation.

The longer it takes you to process alcohol, the longer toxins remain in your body, wreaking all kinds of damage to internal organs and your brain.

When consumed in moderation, on average, the human body can process 1 unit of alcohol per hour. This time is extended when a person binge drinks or has compromised liver health; the liver struggles to cope with the backlog of units that are consumed.

Unlike food, alcohol is not digested. Instead, its chemical compound is broken down, and eventually, all traces leave the body.

Ethanol, the active ingredient in alcohol, quickly reaches the brain, bringing about the onset of effects within seconds of drinking it.

Having been diffused throughout the body’s organs and tissues, it finally reaches the liver after around 20 minutes post-ingestion. The liver then processes the alcohol so it can be dispelled from the body (2)

What Are the Effects of Alcohol?

Whilst under the influence of alcohol, it works on our body inducing several alcohol-related physical effects.

The effects produced by alcohol are mostly attributed to how it affects each part of the brain. 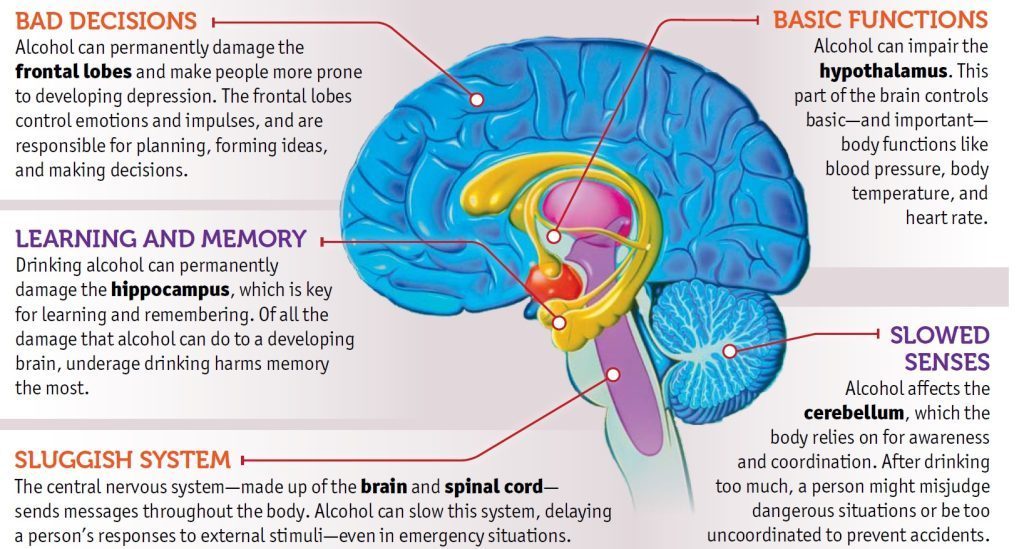 There are many other ways in which alcohol can affect a person physically and mentally; how alcohol works vary from person to person.

How alcohol leaves your body

Alcohol leaves your system in several ways, hence why there are various testing methods.

Alcohol can be detected on the breath, in saliva, blood, urine and even hair. It also partially leaves the body through sweat.

How long alcohol stays in your system will be subject to several factors.

Variants that affect the speed at which alcohol is processed include:

Alcohol’s effects on the brain

The human brain, in particular, is extremely vulnerable to alcohol’s effects and toxins.

Whilst alcohol is present in the brain, and it kills off brain cells and damages tissues. The more alcohol you consume and the more frequently you consume it, the more damage is caused.

When alcohol is consumed in moderation, long term effects on the brain are very minimal and unnoticed.

However, when alcohol is consumed excessively and frequently, the short term and long term effects to the brain can be very profound.

Alcohol is essentially a toxic drug in liquid form and a central nervous system depressant. Alcohol’s effects slow down the brain and body and impair its ability to function as it should.

How alcohol works on each part of the brain

When alcohol reaches the brain, carried via the bloodstream, mood and behaviour changes, the more alcohol consumed, the more pronounced these changes are.

Alcohol abuse can have very negative effects on many parts of the brain that are essential for day to day function.

Alcohol works on each part of the brain in the following ways:

When alcohol is consumed in large quantities, information processed from our senses is slowed and distorted. This causes difficulty in thinking clearly and making safe and rational decisions.

How alcohol works on the adolescent brain 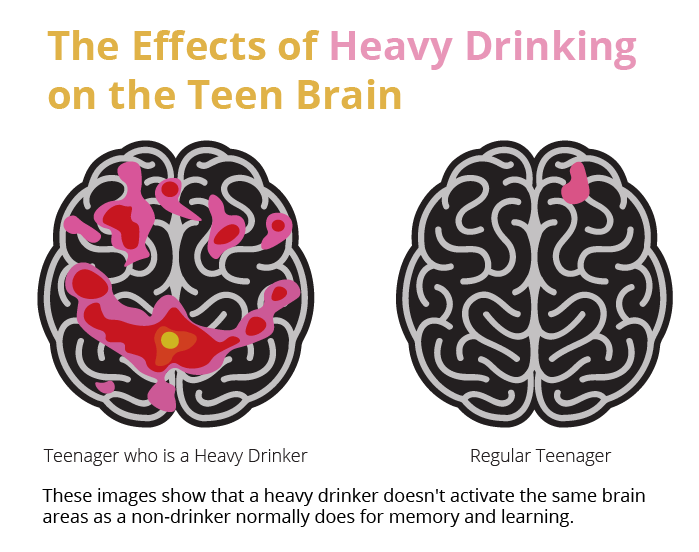 Until the age of 25, the human brain is still forming and developing. Many individuals that go on to develop alcohol use problems, in particular alcoholism, start drinking at a young age.

Studies suggest that young people are prone to heavy bouts of drinking. This can heavily impact on the brains development, causing effects that are felt later on in the persons ‘drinking career’.

Alcohol use during developmental years increases many alcohol-related risks and illnesses associated with both the brain and the body, with cognitive ability and memory being crucially impaired (5)

Ways in which alcohol can cause brain damage

Drinking alcohol to dangerous levels causes damage by destroying brain matter (tissues and cells) and how the brain communicates ( neurotransmitters and brain pathways). There are also many other ways in which alcohol can cause lasting brain damage. 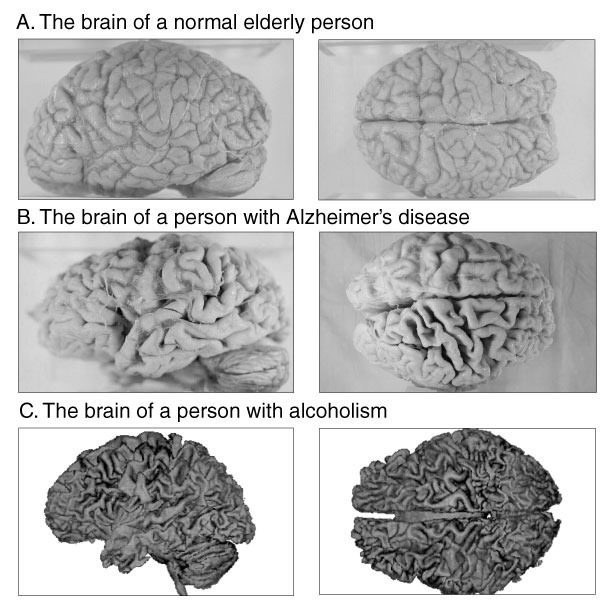 Alcohol prevents the absorption of Thiamin (B1), which is an essential vitamin for healthy brain function. Our body is unable to produce thiamine by itself, so reserves are drawn from the food we eat.

Those that are alcohol dependent or drink heavily and frequently will have their thiamine levels heavily compromised. This is due to alcohol preventing the absorption of vital nutrients.

Thiamine deficiency can lead to Wernicke’s encephalopathy, which if caught in time is treatable. However, if the symptoms of Wernicke are not quickly and comprehensively treated and vitamin B1 levels restored, the brain can further deteriorate into a non-recoverable state known as Korsakoff’s Syndrome. Those with Wernicke’s Korsakoff’s ‘wet brain syndrome’ usually require medium to high levels of personal care for the rest of their lives.

Excessive alcohol use can lead to dependence and addiction

Alcohol dependence and alcohol addiction are the two most severe forms of alcohol use disorders.

Alcoholism, a chronic and progressive brain disorder, essentially develops through repeated exposure to alcohol and how alcohol works on that particular person’s brain.

Over time and with frequent drinking of alcohol, the brain adapts to enable it to function. This is known as tolerance. Once the brain has developed tolerance to alcohol, the person affected will need to drink more and more alcohol to feel the sought after desired effects. This is the start of the progression and can lead to alcohol dependence.

An alcohol-dependent brain will require a certain amount of alcohol constantly within the bloodstream. Any less than what the brain has become accustomed to can result in alcohol withdrawal symptoms.  Severe alcohol withdrawal is considered life-threatening.

Excessive alcohol intake can cause the brain to develop an addiction. Most that suffer from alcoholism eventually become alcohol dependent.

Once the brain has developed an alcohol addiction, it will rewire its pathways, prioritising alcohol above all else. The person affected will physically and mentally crave alcohol continually. They will have little or no control over their alcohol intake and continue to drink alcohol despite mounting negative consequences to their health, mental wellbeing, social life, personal relationships and occupation (10)

Get help for an alcohol problem today

If you or a loved one need help for an alcohol problem, please contact Rehab Guide today.

As a leading authority on addiction and addiction treatment, we will be able to advise you of the treatment required to help enable a full and lasting recovery from alcohol.

Alcohol is one of the most addictive and dangerous substances available, but it doesn’t need to ruin your life or the lives of those you love. Rehab Guide provide professional private, affordable help, support and treatment.

We are here to support you and your family in finding the best possible solution given your individual circumstances.

Contact us today for confidential advice and assistance on 02072052845

What Is Alcohol Poisoning