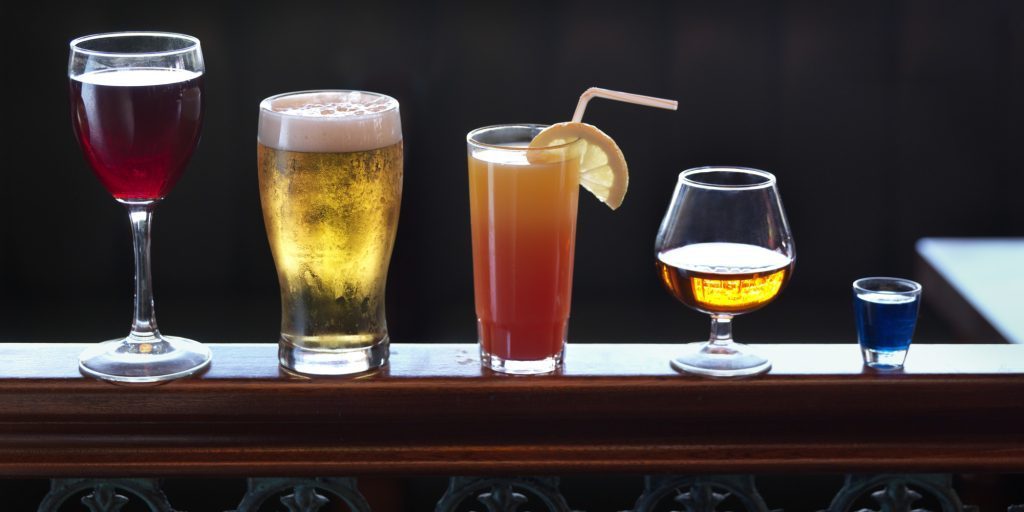 Here, we look at the common forms of alcoholic drinks available in most supermarket stores and online. We also explain the dangers associated with drinking different types of alcohol and how they can be misused.

Walking down any supermarket alcohol aisle, you will likely notice the very vast types of alcohol available when it comes to choosing an alcoholic drink.

Over the past twenty years, not only have many more varieties of alcohol flooded the UK market, but alcohol is now being added to everyday foods, such as ice pops.

The danger of alcohol becoming so widely available is that it is appealing to more and more people. Those that do not like the traditional taste of alcohol now have numerous alternatives to choose from. Some flavours added to alcopops are so strong that the alcohol’s presence is barely detectable to the tastebuds.

Stronger types of alcohol are also expanding in their variety and availability.

Alcohol is a depressant liquid drug that works on the brain and the central nervous system. The active ingredient in alcohol is ethanol, and this is what causes alcohols effects. Ethanol is toxic, so it causes damage to the liver, the brain, and other organs over a period of time.

Once consumed, alcohol reaches the brain quickly via the bloodstream. The more alcohol consumed and the higher the ethanol content, the more pronounced alcohol’s effects are.

Alcohol is labelled with its ingredients and ABV percentage. ABV translates to alcohol by volume and refers to the strength of the alcohol and the percentage of ethanol contained within the drink.  Higher concentrations of alcohol in certain drinks can cause intoxication and alcohol poisoning more quickly and in lower doses.

In moderation, alcohol can be consumed safely. The risks, dangers and problems associated with alcohol come when a person binge drinks, drinks heavily and frequently over a prolonged period of time, or mixes alcohol with drugs or medications.

Abuse and misuse of alcohol and drinking above the Chief Medical Officers safe drinking guidelines of 14 units spread evenly over 7 days can lead to an alcohol use disorder, alcohol dependence and alcohol addiction.

Undistilled drinks – beer and wine – go through a process of fermentation. Fermentation is the process of where bacteria and yeast convert sugar into ethanol, the active ingredient in alcohol.

Distillation is a process that follows on from fermentation and converts the fermented drink into a drink with an even higher alcohol potency.

Is it safe to mix drinks?

Growing up, your parents may have told you before going out never to mix your drinks. Why is this? and is there a valid reason behind this warning?

When you mix different types of drink, it is easier to lose track of the number of units you are consuming and end up binge drinking.

Mixing alcoholic drinks also puts more pressure on the liver to process and break down the different types of alcohol when they are mixed.

To summarise, it is not safe to mix different types of drinks, nor is it recommended. At the very least you could well end up with a very nasty hangover, at worst you could end up with alcohol poisoning, which is considered life-threatening.

What does ABV mean?

ABV is often seen on alcohol brands and refers to alcohol by volume and the percentage of alcohol in ratio to the drink. An alcoholic drink with 5% ABV means that 5% per cent of the drink is alcoholic.

There are many different types of alcohol available. Some you may be familiar with, some you may not be:

Alcopops first came onto the UK market in 1984, with the first version a wine cooler mixed with spring water and orange juice. Various other mixers were also released including spirits that are normally mixed with popular soft drinks, such as gin and tonic, rum and coke and whisky and coke. Generally, the alcohol content of these drinks was relatively low, between 3.5 and 5% but was not hugely popular with consumers.

Hoopers Hooch alcoholic lemonade set the bar for alcopops success and is probably the most well know alcopop throughout history. It was made in the UK following the success of a similar drink ‘Two Dogs’ in Australia. As both alcopops hit the UK shelves, a fierce marketing campaign was launched for both. Following their success, different flavours, strengths and brands soon followed. 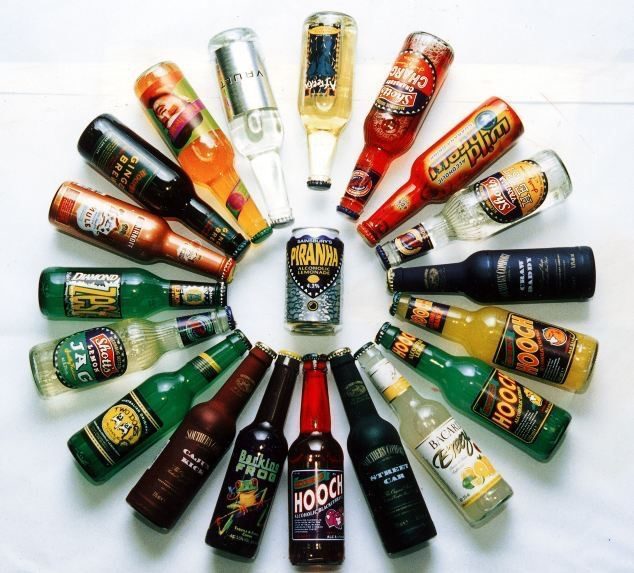 Alcopops usually come in bottles and cans with designs and names that are attractive to the eye. They appeal very much to the younger generation and underage drinkers.

The main danger with alcopops is their appeal to underage drinkers. The taste of alcohol in these drinks tends to be overpowered by the strong sugary, and citrusy flavours added. This makes binge drinking extremely easy, especially for those that do not like the more traditional tastes of alcohol.

Due to concerns being raised of underage drinking being heavily associated with alcopops, the government felt immense pressure to put a halt to the heavy marketing campaign. This, of course, caught the media attention, which probably only increased their appeal.

What is Beer – Lager and ale?

After water and tea, research shows that beer is the 3rd most popular drink in the world. There are two main types of beer – lager and ale, which have numerous brands available.

Standard larger and ale has an average alcohol concentration ranging between 4% and 6%. However, there are stronger forms of lager and ale that contain between 7% and 10% alcohol. Super Tenants, Carlsberg Special Brew and Kestral Super are trendy brands. Some polish beers can have an alcohol content of up to 14% but are less well known. 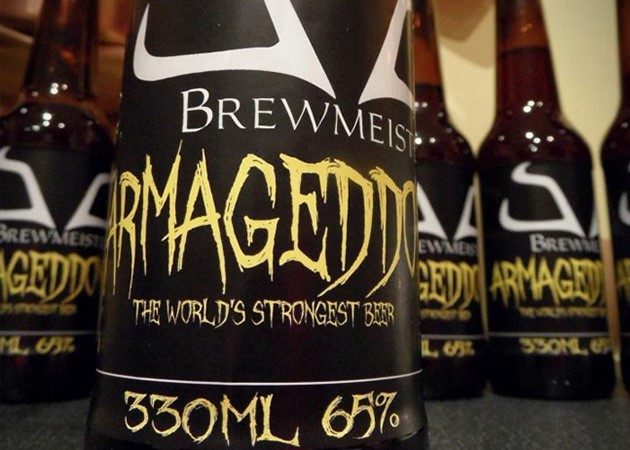 Some crafted beers can have up to 65% ABV.

There are also several crafted lagers and ales with extremely high alcohol concentration, up to 65%. These expensive, high alcohol content beers are not generally available on supermarket shelves and tend to be ordered online direct from suppliers.

Cider is another very popular alcoholic drink and again is available in a variety of flavours.

Other popular hard cider brands include Thatchers, Magners and Strongbow.

In recent years there has been an explosion of fruit ciders onto the alcohol market. Bulmers, notably releasing a range of different flavoured ciders with an average alcohol content of between 4 and 6%

White cider has become a popular choice for those on a budget, White Lightening and Frosty Jacks is heavily associated with homeless street drinkers and has an alcohol content of 8.4%

There is also a select market for very strong alcoholic crafted cider that can be sampled at cider fairs and ordered online front the manufacturers and suppliers.

The three main types of standard wine are white, red and rose. Alcohol by volume in wine varies immensely from 5% up to 20%, as does cost.

Wine is commonly consumed to complement meals. In certain warmer European countries where wine is produced, it is very much a part of their culture and even their upbringing.

Standard wine has an alcohol content of between 10 and 12%. Champagne is also a type of wine and tends to be more expensive and associated with those who are financially wealthy.

What are Spirits and liquors?

Spirits and liquors have a high volume of alcohol content as they are distilled alcoholic beverages. They can be consumed as they are, or more commonly mixed with a soft drink. 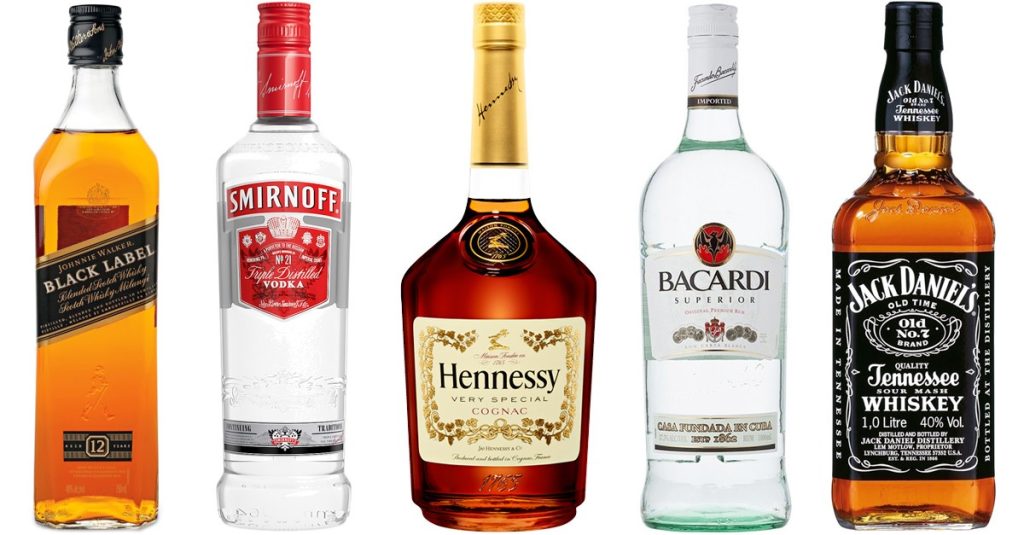 Some examples of  popular brands of spirits and liquors

Jager bombs are particularly popular with the younger generation and come in a variety of unusual flavours, After Shock being a good example.

There are many brands of spirits and liquors available around the world on supermarket shelves—the average alcohol content, ABV,  of spirits being 40% proof.

Absinthe is a spirit that can be very high in alcohol volume concentration, up to 90% proof. Absinthe can be consumed on its own, but due to its high alcohol content and burning effects, it tends to be diluted with soft drinks.

Everclear is the strongest alcoholic spirit available. The minimum alcohol content of Everclear is 60%, but there are forms of Everclear alcohol that have an ABV of up to 95%, basically pure alcohol. As you can imagine, this is a very dangerous drink in the wrong hands or in the hands of a person who is unaware of its potent effects. 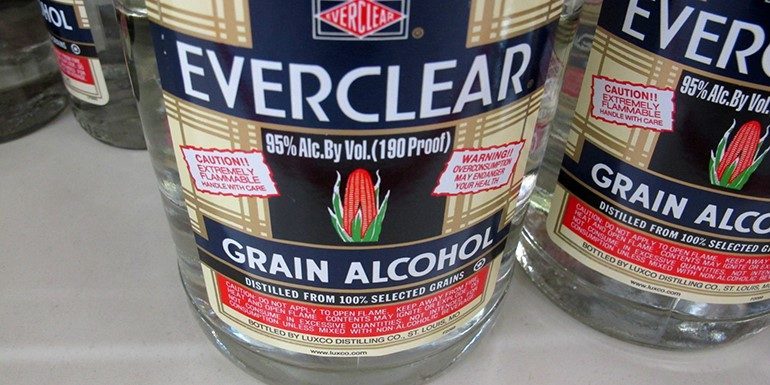 Everclear is an extremely strong distilled spirit, with up to 95% ABV.

The most dangerous type of alcohol

All types of alcohol can be dangerous if not used responsibly. Traditionally, beer and alcopops can be a gateway drink to stronger forms of alcohol and binge drinking.

When a person consumes ANY alcoholic drink, frequently and to excess, they become used to its effects, and it no longer gets them drunk. This can lead to them progressing to drinking stronger forms such as wine, liquors and spirits.

When a person can no longer get ‘drunk’ on a particular type, amount, or percentage of alcohol, this indicates they have developed tolerance. Alcohol tolerance means that they will either have to drink more of the particular drink or change their drink to a higher percentage of ABV. Tolerance can lead to alcohol dependence.

You may be shocked at the amount of alcohol a person can consume daily once they have developed dependence. As a leading authority on quality CQC registered alcohol rehabs in the UK, we frequently admit patients who are consuming up to 60 units of alcohol a day.

Any alcohol dependence, regardless of the amount consumed daily, whether it be 10 units or 50 units, is extremely dangerous to both mental and physical health.

Alcohol dependence should ideally be treated with a full medical detox to ensure that the person can stop safely without risks and complications.

Alcohol withdrawal can be life-threatening, so if you or a loved one have a problem with alcohol and want to stop, please seek medical help and advice first.

Local medical alcohol detox can urgently be accessed through our private residential services as can a bespoke rehabilitation programme. Call Rehab Guide today for fast, professional, effective help and advice.

How to Quit Drinking Alcohol

What Is Alcohol Poisoning?