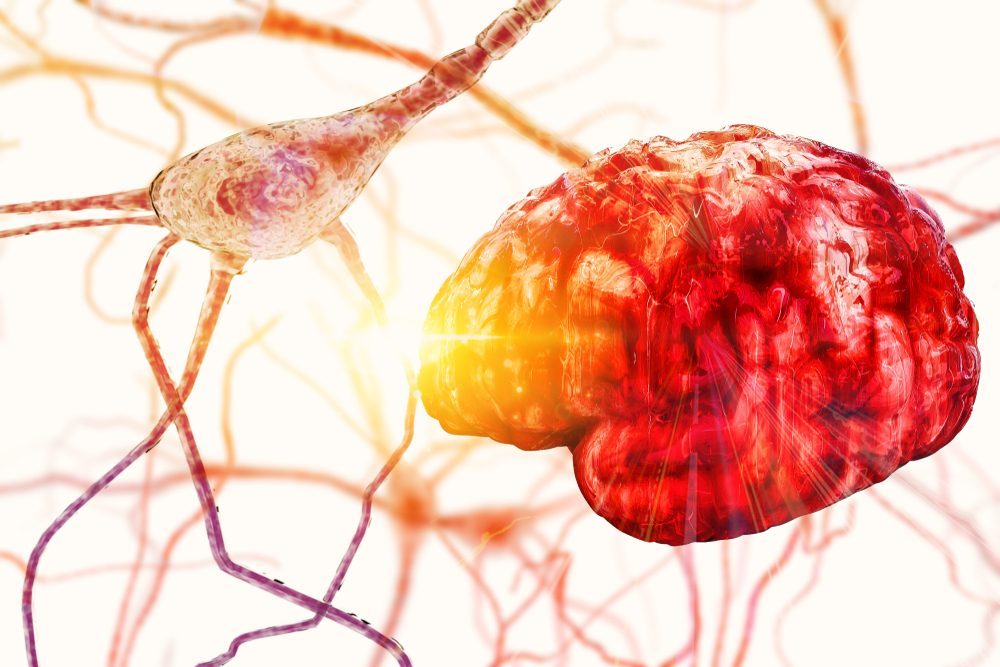 Alcohol’s effects on the brain

Most of us know that a heavy night of drinking can leave us feeling befogged and hungover the next day, but did you know just how bad alcohol is for healthy brain function and the long term impact that regular heavy drinking has on the brain?

Rehab Guide is not just here to help those with an alcohol problem to access treatment; we also aim to help educate as many as possible on the dangers of alcohol and substance misuse.

Alcohol is one of the most widely used drugs around the world. When consumed within moderation and within The Chief Medical Officers safe drinking limits of 14 units per week, spaced out evenly, it is relatively harmless. We stress it as being reasonably harmless as everyone reacts differently to alcohol. What is generally considered safe consumption for one individual may not be safe for another.

In this post, we take an in-depth look at how alcohol affects the brain, in particular, when it is consumed in excess and over prolonged periods of time. Most individuals who drink excessively will only consider the more talked about risks such as liver disease and generally poor health. The reality is that alcohol affects every single organ in the body negatively, and that includes the brain.

How alcohol is metabolised by the body

Alcohol, chemically referred to as ethanol is a toxin. When consumed and broken down by the body alcohol is converted into an extremely toxic byproduct called acetaldehyde. Although acetaldehyde only remains briefly in the body before being broken down further into acetate, it has the potential to harm every tissue and organ that it comes into contact with. (1)

Acetaldehyde remains the longest in the liver but is also briefly present in the pancreas and other organs including the brain as it is carried throughout the bloodstream. While it is present in the brain is damages both brain cells and tissue (2)

In an individual that drinks heavily or frequently, acetaldehyde becomes more of a risk factor. The body is only able to break down and metabolise on average 1 unit of alcohol per hour (3) In a heavy or frequent drinker the liver struggles to function efficiently and so alcohol takes longer to metabolise. The more the brain and other organs are exposed to acetaldehyde, the more they become damaged. This damage can remain even once the person has stopped drinking alcohol altogether.

In addition to causing damage to cells and tissues in the brain, some scientific research has also indicated that acetaldehyde may be responsible for the psychological and behavioural side effects that are associated with drinking alcohol; side effects such as memory impairment, sleepiness and reduced coordination (4)

To summarise, the toxins that alcohol is broken down into before being expelled from the body are highly erosive. In a moderate drinker, the damage is minimal, but in a heavy drinker or binge drinker, there are more toxins, and the toxins remain in the body and brain for longer.

The short term effects of alcohol on the brain

Aside from alcohols toxins causing damage to the brain’s cells and tissues, most of us know that drinking alcohol affects how we function in the short term while under its influence.

The short terms effects of alcohol on the brain cause the following symptoms. These effects can range in severity according to the amount of alcohol consumed, how quickly the individual metabolises alcohol and their individual tolerance to alcohol:

Mild to moderate consumption of alcohol – The short term effects on the brain:

Moderate to excessive consumption of alcohol – The short term effects on the brain:

Alcohol’s short term effects wear off once the alcohol has been metabolised. In cases of excessive alcohol consumption, moderate to severe alcohol short term withdrawal symptoms (commonly referred to as a hangover) can be felt well into the following day.

A ‘hangover’ is mostly brought on by dehydration (alcohol is a diuretic). Still, some hangover symptoms are a result of alcohols toxins which cause a reaction in the blood vessels and brain (6) Symptoms of an alcohol-related hangover include:

A hangover should not be confused with alcohol withdrawal syndrome, which occurs when an individual is alcohol dependent. Acute alcohol withdrawal is hazardous and should always be managed through a medical detox administered by professionals.

The long term effects of alcohol on the brain

Heavy or chronic alcohol use carries numerous long term risks. The damage to the brain can result in physical, behavioural and psychological symptoms developing.

The long term effects of heavy alcohol consumption include:

Scientific studies carried out on the brains of alcoholics have found that their brains are significantly smaller than moderate/non-drinkers. This indicates that heavy alcohol consumption destroys and diminishes brain cells and tissues (8) 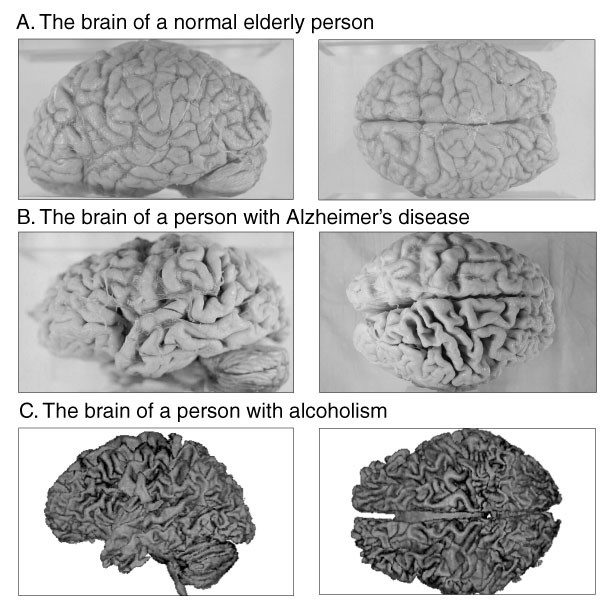 In comparison with the brain of a typical elderly person (Panel A), the wider grooves and narrower ridges of the brains in Panels B and C indicate the decrease of brain tissue seen in Alzheimer’s disease and alcoholism. (9)

Getting help for an alcohol problem

The longer you leave an alcohol problem unaddressed, the higher your risk of sustaining irreversible damage to your brain and other organs.

Rehab Guide recommend some form of inpatient detox at a rehab centre. This increases the well-being of the patient as well as their prospects of a successful recovery. Through private detox, abstinence, and a healthy diet, brain scans show some consequences of heavy drinking can be undone.

Alcohol treatment medicines like Acamprosate and Naltrexone may be prescribed to block the effects of relapse or decrease alcohol cravings.

In long term heavy drinkers, the risks of alcohol-related brain damage are very real. If you or someone you love fall into this category, we urge you to call us to discuss your treatment options. We will advise you on the best possible alcohol treatment plan according to your individual set of circumstances.

Get free advice today from our alcohol addiction experts on 02072052845

Alcoholism in the Workplace