Most people know that drinking alcohol excessively whilst being prescribed the antidepressant Sertraline (Zoloft) can contradict the drug’s effects.

In other words, alcohol is a depressant drug, and when consumed to excess, it prevents antidepressants from working as they should.

Many people do not realise that the short-term effects of mixing alcohol and Sertraline are something that everyone who is prescribed this medication should be aware of.

Not only does alcohol prevent Sertraline from working as effectively, but drinking alcohol whilst taking Sertraline can cause immediate side effects & health risks.

What is Sertraline & how often is it prescribed?

Sertraline is the most commonly prescribed antidepressant medication in the UK and is sold under the brand names of Lustral and Zoloft.

SSRIs are often the first-line in treatment for the symptoms of anxiety and depression. Other SSRIs  most commonly prescribed of all the antidepressant medications are Citalopram, Fluoxetine (Prozac) and Mirtazepam 1.2

Sertraline is commonly prescribed for the treatment of:

Why is Sertraline so commonly prescribed?

Sertraline tends to be prescribed more often than other SSRIs, as NICE prescribing guidelines recommend it over other antidepressant medications for patients with chronic health problems.

This is due to sertraline having fewer interactions with other drugs. However, it does not mean that it is safe to consume alcohol with Sertraline.

After around 3-4 weeks of taking Sertraline, the drug has a positive effect on a persons ability to fall asleep. An individual who takes serotonin reuptake inhibitors will have a build-up of serotonin in the body which increases melatonin levels. Melatonin is a hormone primarily released by the pineal gland at night and has long been associated with the control of the sleep-wake cycle. The precursor to melatonin is serotonin, a neurotransmitter that itself is derived from the amino acid tryptophan.

The effects of mixing alcohol and Sertraline (Lustral)

With Sertraline being so frequently prescribed, many people who take this medication will also drink alcohol. They will also not be fully aware of the risks and complications of mixing the two. Most people taking Sertraline will get questioned at one point by someone close to them, ‘Can you drink on Zoloft?’. This is usually due to curiosity or concern that mixing the anti-depressant with alcohol could cause adverse effects. 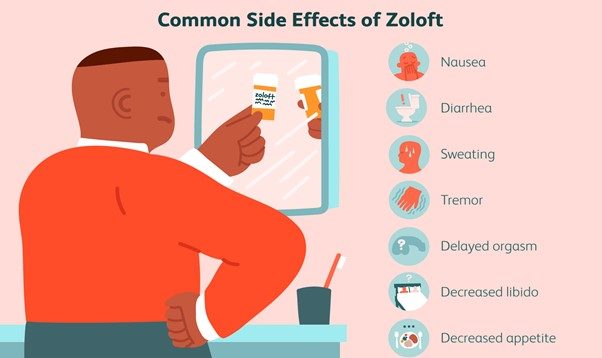 The short term risks & effects of mixing Sertraline and alcohol:

For the above reasons, it is recommended that all alcohol use be avoided whilst undergoing treatment. Drinking alcohol whilst taking Sertraline will make you more prone to suffering an accident or injury or making an impulsive, ill-judged decision that can have long-lasting or fatal effects.

The long term risks of mixing Sertraline and alcohol – Can I drink alcohol whilst taking Zoloft?

Drinking alcohol isn’t recommended if you suffer from an anxiety disorder or depression. In fact, drinking alcohol to excess or abusing it can even trigger the onset of anxiety-related or depressive disorder. [8]

Drinking alcohol whilst taking Zoloft is actively discouraged because of dangerous health risks and implications. 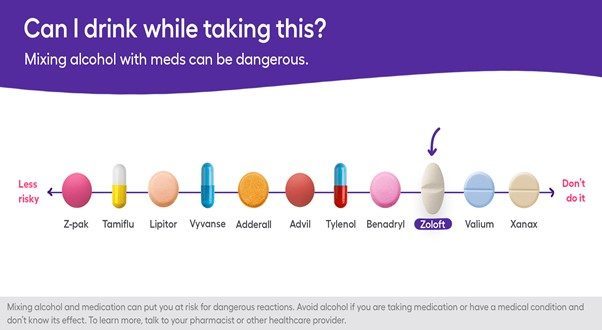 Whilst it can be tempting to have a few alcoholic drinks to relax from anxiety or stress, the effects of alcohol are only very temporary. As alcohol depresses the brain’s function whilst it works, when the effects wear off, the brain speeds up again.

Add to this the effects of a hangover, poor quality sleep and dehydration; the following morning can leave you feeling extremely anxious, low in mood and unmotivated. If you are taking Sertraline, these effects will only be further increased [9]

The likelihood of developing a problem with alcohol if you suffer from anxiety is increased, as alcohol seemingly (albeit temporarily) calms anxiety symptoms.

If you are prescribed Sertraline (Zoloft), please be aware that frequent alcohol use could lead to an alcohol use disorder and consequently a much worsening of your anxiety and depression. [11]

Signs of an alcohol use disorder include:

If you or a loved one are trying to self-medicate anxiety with alcohol or are mixing alcohol with Sertraline, professional help is strongly recommended.

Continuing as you are, when large amounts of alcohol are involved, your anxiety will only get progressively worse. This, in turn, could lead to developing an alcohol use disorder which can be potentially fatal if left untreated, and a long-lasting rewiring of your brain  11,12

Thankfully, professional dual diagnosis treatment is available, and we at Rehab Guide are here to help. Call us today for a free and confidential assessment of your individual treatment needs. We are here to support you or a loved one in accessing the correct professional help for a full and lasting recovery from alcohol and anxiety.