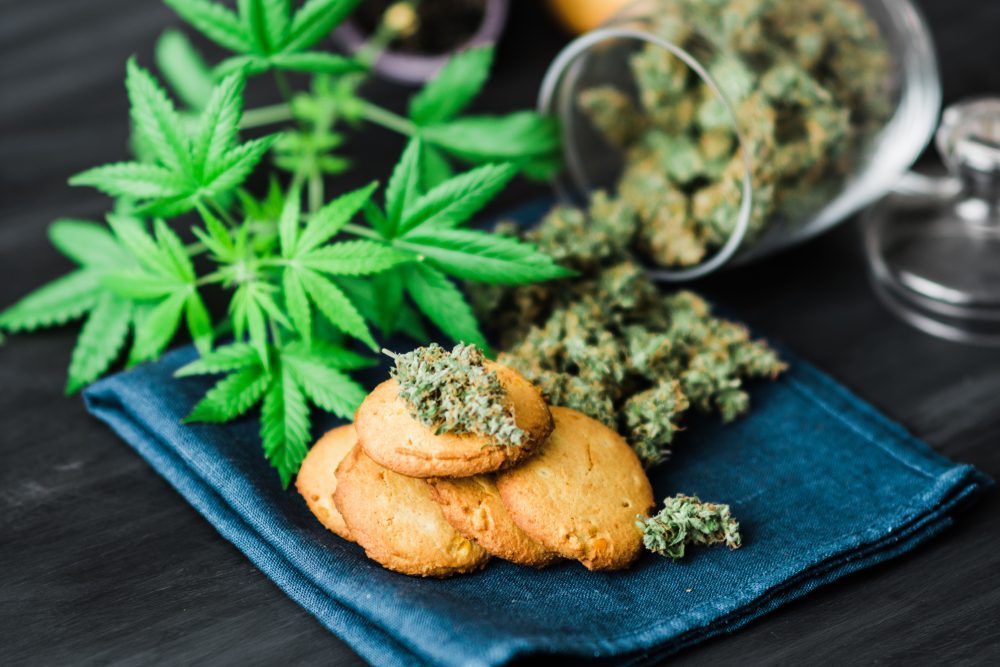 Smoking marijuana carries some obvious risks, especially when smoked in the traditional way mixed with tobacco. For those that are fans of the effects of THC, marijuana edibles may seem like a safer and more appealing option. Not to mention the fact that you are essentially killing two birds with one stone (so to speak) by satisfying the craving for ‘munchies’.

Cannabis edibles tend to appeal to a much wider range of people in society because of their social acceptability (no distinctive lingering smell of Cannabis on your clothes, no stigma attached to drugs). Also, no one has ever overdosed from eating too many Hash brownies, right?

The problem lies in the general complacency and lack of knowledge applied to marijuana products. Many in society have accepted THC edibles as a safe, fun and tasty way of achieving a ‘mild’ euphoric high.

Most people do not realise that the body ingests THC within edibles at a different rate and in another way from inhalation. Opting for cannabis edibles over smoking cannabis results in a longer-lasting & more pronounced high, with some unpredictable & undesirable side effects.

What are marijuana edibles?

Marijuana edibles cover a wide range of foods and drinks that can be baked, cooked or prepared with the extract of marijuana added.

Types of edible marijuana include:

●     Marijuana and CBD gummies: Cannabis-infused gummies are very popular and come in various shapes, colours and flavours. Marijuana gummies are available with or without THC

●     Other products: Examples include ice cream, bread, savoury dishes and mints. Anything prepared, and edible can infuse with marijuana.

Edible cannabis can vary in its CBD content and THC content, depending on how they are made, the strain of Cannabis used, and if the THC has been filtered.

Legally, only CBD (Cannabidiol) edibles are available to produce, sell and buy in the UK. To be considered legal, they must have less than 0.2% tetrahydrocannabinol (THC) content; basically, the THC must be untraceable. Consuming UK legal CBD edibles will not get you high. However, you will still gain the benefits of CBD, which has proven useful in helping to alleviate symptoms of chronic pain, lessen seizures and calm anxiety.

Technology has made shopping for illegal UK edibles increasingly easy. Although it is not recommended to purchase cannabis online if you feel compelled to do so, be careful not to take too much at one time.

Types of ‘Edibles’ that get you high & their effects

Aside from CBD edibles, which are not to be confused with marijuana edibles, three main types of THC infused products are available, each varying in its effects.

Sativa Marijuana Edibles:  The Sativa cannabis plant is known for its energy inducing and creative effects. Sativa edibles will contain both CBD and THC and may make you feel giggly, euphoric, productive and motivated, with increased energy levels. As the cannabis Sativa plant has more stimulating effects, its preferred use would be during the daytime.

Indica Marijuana Edibles: The Indica cannabis plant contains THC and CBD and differs from Sativa’s effects. Indica gives a much more mellow ‘high’. The results of ingesting Indica edibles may make you feel calmer, more relaxed and content. Indica tends to be preferred by those that want to relax entirely and is commonly used before bedtime.

Hybrid Marijuana Edibles: Hybrid marijuana edibles contain a cannabis plant extract mixed with both Indica and Sativa. Containing both CBD and THC, Hybrid edibles are explicitly manufactured to carry the effects of both parent plants. They are also grown in general to be very potent in their THC and CBD content.

Whilst the types of edible cannabis and their effects may seem straightforward, as in picking the kind of effects you want and consuming the matching edible, it is not quite that simple!

Besides cannabis/marijuana containing THC and CBD, more than 100 other cannabinoids have been scientifically identified. The cannabis industry is hugely lucrative, and therefore manufacturers are always coming up with new plants with stronger and longer-lasting psychoactive effects 1

In Scotland, the Food Standards Scotland (FSS), Police Scotland and Public Health Scotland have voiced concerns about the production and online sales of cannabis edibles by organized crime groups on TikTok, Facebook Marketplace and Snap Chat. Not only are cannabis edibles illegal, but it’s also a concern that people are consuming products that aren’t regulated by the food standards agency.

Not everyone will have a good experience when consuming cannabis; some people will experience the exact opposite of what they hope.

Cannabis is notorious for disagreeing with some people. There is no telling how a person will react.

● Feeling like the ‘trip’ is never going to end

● Feeling paralysed or unable to move

● Loss of feeling in limbs

Even if you have previously consumed cannabis without a problem, a different strain or strength could trigger a completely different reaction. Once the effects of cannabis start, there is no way of stopping them until they eventually wear off.

Cannabis edibles can have effects that last for up to 6 hours or longer, depending on the amount consumed and the person’s metabolism.

How Cannabis interacts with alcohol

Mixing cannabis with alcohol or drugs is a common form of abuse. Some places abroad even sell cannabis-infused wines, beers, alcopops and spirits.

Drinking alcohol whilst consuming marijuana will only make the effects more pronounced.

By mixing, you will also be at a much higher risk of accidents, alcohol poisoning and THC overdose.

Because of the considerable risks, combining alcohol and THC, regardless of the form it is taken in, is not recommended.

Edibles have several dangers that are unique to them. These dangers are far less likely to happen with cannabis solids, weed, wax or oil, due to the appearance, taste and preparations involved in making them usable. 2

The unique dangers  include:

● The products look like familiar sweet products with colourful packets and appeal to children, even toddlers

● They appeal to the elderly

● They appeal to teenagers

● Edibles have a delayed onset of action

● A person can be easily tricked into consuming edible cannabis

● They appeal to pets

● Effects can be more potent in edible cannabis

● Effects take longer to wear off

● Unknown dangers to the brain in the long term

Even though the consumption of cannabis has been around for a long time, it is only in more recent years that they have gained in popularity. As a result, there are many different products available containing very different ingredients. The full extent of the harms that edible cannabis can cause is not fully understood as yet.

The main difference, and perhaps one you would expect, between inhaling Cannabis and eating it, is the period it takes to feel Cannabis’s effects.

Naturally, anything that is inhaled goes straight into the bloodstream and reaches the brain within seconds. Consuming edible marijuana has to go through the process of digestion. Delayed onset of action can cause a person to consume much more than they would if they smoked it. They may feel it isn’t working or that they haven’t consumed enough. For this reason, edibles can be more dangerous than the direct inhalation of marijuana vapour 2

On average, the effects of cannabis-infused edible products can be felt within 30 to 90 minutes of consuming them. Many variables can affect this time frame, including the edible, the health of your gastrointestinal tract, liver health, individual metabolic rate, medications, alcohol or other drugs, hydration levels and whether you have recently eaten or not.

While two people may consume the same amount simultaneously, one person may feel the effects within 30 minutes, whilst the other is still waiting an hour later. You can see how easy it would be for a person to assume that they haven’t worked and consume more.

Consuming too many will carry adverse and very unpleasant side effects. The side effects of eating too much edible cannabis include paranoia, extreme anxiety, hallucinations, delusions, and an altered perception of time. In some rare cases, a severe psychotic reaction can be triggered by over-ingesting edibles. 2

The other poignant difference between smoking cannabis and eating cannabis is in the way the body processes it.

With edibles, a much more significant fraction of the THC content makes it to the liver first. This results in edibles having more potent effects than cannabis vapour. These effects also last longer.

The liver processes the THC in edible cannabis and converts it into 11-hydroxy-THC, a type of cannabinoid that is much stronger in edibles than it is in cannabis smoke. Consequently, how the body processes edibles is key to them having more potent and longer-lasting effects than cannabis vapour.

Probably one of the most sinister and disturbing features is the appeal to children. UK police have alerted schools and families regarding the dangers of cannabis-infused edible products sold to children in the playground.

There have been reports of children suffering from violent reactions to cannabis-infused jellies and sweets.

Popular brand names of sweets can be copied and infused with THC.

Children, in particular, will have very little knowledge about the dangers and are far more likely to consume them in dangerously high amounts and in the same way they would ordinary sweets.

The other concern is that a child’s brain is not the same as an adult’s; it is far more vulnerable to the effects of Cannabis. A child who consumes cannabis-infused edibles is far more likely to suffer a severe adverse reaction than an adult. They are also far more likely to abuse them, not fully understanding the dangers involved in doing so 5

While the main focus is on the dangers of consuming too much THC and suffering adverse effects, like any drug, they can lead to drug tolerance and drug addiction.

Due to them having a delayed ‘high’, there is less chance of an addiction developing when compared to other drugs that provide a more immediate ‘hit’. Nevertheless, there is still a risk, and you should not disregard this.

It is possible for a person predisposed to developing an addiction or using edibles during childhood or teenage years to create a full-blown addiction to them. An addiction to anything is extremely harmful as it involves excessive exposure and adverse consequences.

Addiction is a recognised brain disorder whereby the brain’s pathways and neurotransmitters are altered structurally through excessive exposure. These changes to the brain are long-lasting and compel the sufferer to prioritise the substance (or activity) above basic human needs 6

Factor into this that Cannabis carries additional mental health risks; it is just as dangerous as any other drug when abused.

If you are concerned about marijuana addiction regarding yourself or someone you love, please seek treatment.  Addictions cause harm physically, mentally, socially, educationally and occupationally, so it’s important to seek professional help and treatment.

Call us today for a free and confidential assessment of your individual treatment needs, and receive expert advice on how we can assist with effective bespoke treatment, help and support.