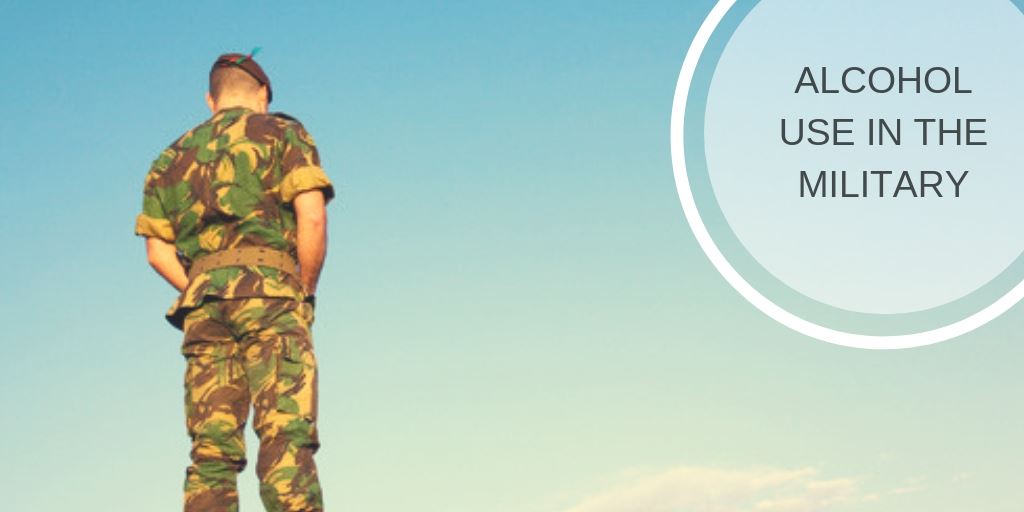 People who choose to join the military often do so with their eyes wide open, knowing the risks and dangers associated with it.

They will be the ones putting their lives on the line should a crisis occur, and they do so willingly. Even in peacetime, the military is a dangerous occupation with physical and mental hazards. Unfortunately, it’s becoming more and more common that a significant hazard for it is substance abuse and addiction.

Joining the military is like entering a separate society with its own rules and culture. A prevalent aspect of that is a culture of acceptable alcohol consumption. It is often encouraged, or at the very least, ignored, when a soldier drinks a lot, or drinks to excess regularly. This tacit acceptance of alcohol use and abuse and the dangers of the military lead to addiction and a need for alcohol rehab treatment that is often higher than people in civilian life.

Binge drinking in the military

When we look at the numbers, we can see a clear connection between alcohol use and the military. The inherent dangers and the culture of the military help promote this but looking at the numbers tell us how these factors come together to increase the drinking done by soldiers.

To give a point of comparison, let’s look at the numbers for the civilian population. In the UK, a 2016 survey reported that a little more than 40% of the population do not drink or have not had a drink in the past year. Out of the rest of the population, only just under 2% will be drinking at levels that qualify as a substance use disorder.

Now as looking at a 2017 study of the military, there is an important difference in the numbers. These will vary by branch of service, with the navy and the army having the highest scores. The military personnel who reported not drinking at all, or not drinking in the past year was between 4-8% of that branch’s service members. Remember, in civilians, that number is 40%. Already there is drinking at much higher levels. For those service members who drink, the number who qualify for the diagnosis of substance use disorder stands at between 3-4%. The levels of alcohol addiction in the military stand at almost twice the amount as in civilian life. Finally, the number of soldiers at high risk for developing an alcohol use disorder or addiction, those that are drinking almost at abuse levels, or are beginning to demonstrate some of the symptoms of it, ranging from 56-64%.

To recap, drinking in the military is a valid phenomenon. From the results of surveys, we can see that drinking is at twice the rate as the general population, and the risk rate is much higher than that. With this data in mind, here are some theories on why drinking is so prevalent in the military.

Why is drinking so common?

Some of this may be obvious, but drinking has always been prevalent in the military. It is almost a historical fact. The major question is why is this the case.

The first clue is in history. It has almost always been there. For as long as health surveys have been done, we can see that drinking has been higher than in the general population. Even before scientific measures, stories, diaries, and in literature and entertainment gave us a picture of soldiers drinking as a way to escape. It has always been this way because it is part of the institution. It’s in the culture. There is a pervasive permissiveness towards drinking. Alcohol is condoned and even encouraged at times in the military.

The military has its own code as well. It is pretty infrequent that they talk about what they do, partially due to legal reasons, but also due to the culture and the unspoken rules of behaviour they have. They rely on themselves and each other, the people in their unit, but few outsiders get in that small world. This limits the opportunity for them to get help when they are struggling and increases the chances they will turn to unhealthy means to cope when they are in dire circumstances.

Now, that’s not always a bad thing. There can be a lot of shared experiences and bonding that occurs over a drink. This can be a way for soldiers to talk about their experiences and grow together as a unit. It can also be a way to help overcome the horrors of war, and process trauma, by talking about it, and a lot of talking happens while having a drink. The issue comes when alcohol abuse and addiction take the place of a friendly drink with your unit.

Alcohol is also a very effective numbing agent. It often sedates, slows down, and muffles feelings, since it is a depressant, a type of psychoactive substance that slows and reduces activity in the brain and nervous system. Think about it from the point of view of a service, especially one in active duty. There are people who are actively trying to kill you, and perhaps in an occupied land, you are not able to tell who is a friend and who is an enemy. You have to be on guard and alert every moment of the day. This level of arousal and alertness is possible, but it comes with a price, a risk to one’s health and one’s sanity. Drinking as a way to be able to get away from that level of stress, when they are able to, suddenly makes a lot more sense.

Finally, there is the damage that comes from being in combat or being in an otherwise high-risk situation. Post-traumatic stress disorder (PTSD) is one of the most common mental disorders for people who are in the military, and for those who see active duty, the rates of it just go up. PTSD happens when a person has been in or has witnessed, a deadly or violent incident. This happens almost daily for some in active combat arenas. The symptoms they experience when they are finally back home involve reliving the event, feeling panic, always still on alert, and not being able to sleep, possibly due to reliving the trauma in night terrors. Listing the symptoms, it again becomes clear that some people will do anything they can to alleviate this pain and anguish. Alcohol abuse suddenly seems more understandable.

Signs of alcoholism among  the military

So it seems like a person in the military, or former military, is at really high risk of drinking and developing an addiction. This is true, but it does not mean that they will never be able to change. Help is available to them, and addiction within any population is treatable.

One of the issues that need to be addressed when working with military members who have alcohol addiction is that of PTSD and any other underlying problems that may be prevalent within the community. PTSD is common enough that many addiction treatment centres are trained and able to accept patients that are diagnosed with this, as well as other illnesses like depression or anxiety disorder that are all too common in military and former military.

The goals of treatment are the same, to help the individual overcome their addiction to alcohol and help them learn healthy ways of coping and handling distress when it arises. This may include specific techniques to help with those currently serving, so that they may be reintegrated with their unit or service branch. Alcohol abuse is more common in the military, and for some whose life is focused on their military career, it may be necessary and helpful to prepare them for reintegration.

Standard treatment models have been found to be effective at helping military members overcome their addiction to drugs or alcohol. This includes the use of alcohol detox to help them manage the withdrawal period and symptoms. Detox units provide medical and emotional support to people with long-standing addictions, who need help getting through the pain of withdrawal.

After you have received alcohol detox help, you will be ready to begin a programme of rehabilitation. Inpatient treatment methods provide intensive therapy and help stabilize the person. There are intensive individual and group therapy, as well as educational classes that help people in treatment learn about their addiction and healthy ways to handle stress. There may be specific classes for military members or those struggling with PTSD. The purpose here is to help the person reset their life, and start to relearn how to live without drugs or alcohol. After this, it is recommended that an aftercare program be used to provide ongoing support and individual and group counselling on a weekly or monthly basis.

Alcohol use and abuse in the military is quite common; in fact, it is the norm for the culture. That does not mean it is helpful or healthy when service members start using it as a means to cope with stress or trauma. There are healthier ways to manage that, and there are treatment options for people who find themselves drinking more than they should, or even want to. Help is available to military personnel suffering from alcohol addiction, and it takes their kind of strength to reach out and accept it.

If you’d like to get started on rehab treatment, please contact us at Rehab Guide UK on 02072052845  We provide both inpatient and outpatient treatment options throughout the UK. We can develop a customized alcohol addiction program just for you that uses validated treatments. Please call now to find out more about our services.